Last night was forecast to be another doozy of a cold night, 9 degrees and colder with the wind.  So I cleaned out the main area and put some more dry bedding down.  All the goat kids had their coats on and I piled them all up in the small pen with the heat lamp for the night.

I also drug Penny out of her pen (I had separated her from the rest of the herd after she gored Nettie) and brought her inside the barn because she was looking like she may be kidding soon; I didn't want her having the kids out in the open and succumb to hypothermia.  The lady I got her from said she was in with the buck from July to the middle of October so we're getting down to the last week before her last due date.  And I know she's pregnant as not only has her udder been filling up but I massaged her right side and felt a kid in there.  I turned the baby monitor on and went back inside.

About 2 am I went out to check on everyone, mostly because I didn't hear a peep from any of the goats (which kind'a worried me....quite goats usually equal mischievous goats).  Four of the goat kids has moved to the other corner and gimpy and Lily's buckling were in the other corner, Pickles gimpy kid was yelling (imagine that) so I brought Pickles in to give him a late night snack.  Lily's buckling was still curled up and snoozing so I didn't want to wake him.

In hindsight, I should have.

I got up around 6 to check on everyone again.  Dawn was breaking and the snow cover on everything made it look much lighter than usual so everyone wanted to get up and nurse and out of the barn and jump around.  All except Lily's little buckling.  I picked him up and he seemed sleepy still.  I stood him up and nudged him towards Lily to nurse, but he didn't seem interested at all.  He hadn't nursed since the evening before so I was worried.  After more prodding and rubbing, he still didn't want to do anything but stand there so I brought him inside figuring he was cold and I'd just warm him up by the fire for a little bit to get him going again.  After about fifteen minutes by the fire, I stood him up and he kind'a hunched up and just stood there. 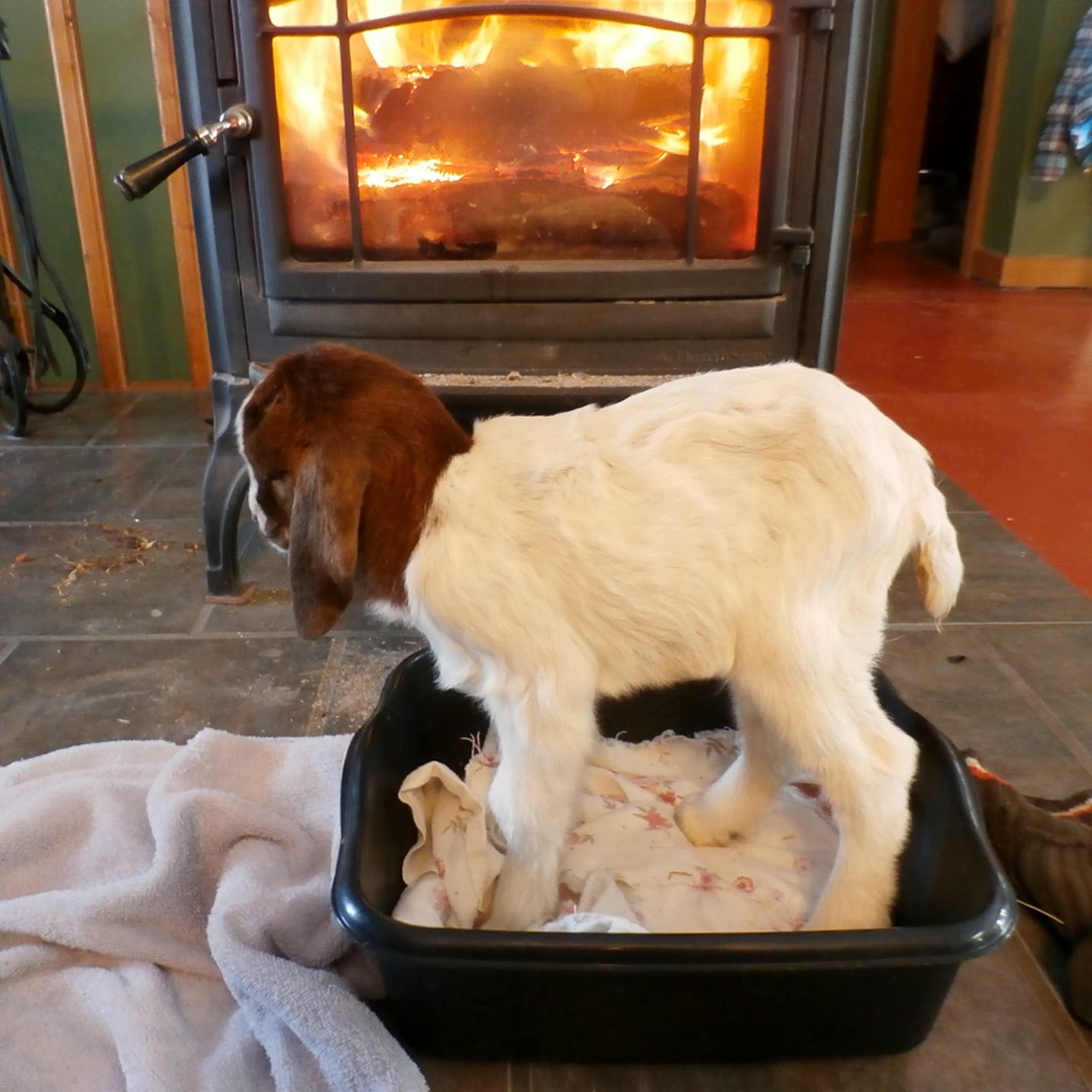 Not wanting to move, not wanting to do anything at all.  Then I remembered just recently reading a blog about hypothermia in goats & lambs and that the hunched up stance was a sign of hypothermia.   I got out the animal thermometer and it read 97.8.  NOT good!  I took off his sweater and put him in a plastic tub lined with towels and put it closer to the fire (made to sure to turn him around so he didn't cook).

While he was warming up, I got the stomach tube and syringe out, made a concoction of goat milk replacer, Nutridrench and some Dextrose, warmed it up to 100 degrees and got ready to do my first emergency tube feeding.  Took his temperature right before tubing him and it was up to 99.  Paul had just got home so he held the little guy in his lap while I slowly pushed the tube in the side of his mouth and then down into his stomach.  The kid was pretty weak so there wasn't much of a struggle at all.  He did some swallowing reflexes and when I was pretty sure I had the tube down into his stomach, slowly pushed the plunger on the syringe and gave him the hopefully life-giving concoction.

I only gave him an ounce in fear of pumping him too full too soon.  About a half hour or so later his temperature was up to 100.1 so I tube fed him another ounce of the milk mixture.  This time he wasn't as subdued and didn't want the tube in his mouth but I got it down without too much trouble.  I stood him up and he stayed up for about five minutes, then slowly laid back down.  He's now sleeping on a pile of towels in front of the fire.  His temp is up to 101.7 but I'll keep him inside until he starts walking around and looking more alert.  That is, if I wasn't too late to help him. Right now I'm going back outside to see what other goat emergencies await me.
Posted by Carolyn at 10:25 AM