The Wait is Over

Which isn't necessarily a good thing.

Lily's little buckling who had hypothermia, thanks to me, didn't make it.  He hadn't moved much since bringing him in and slept the entire time.  I was waiting for some sign, either of improvement or worse.  Around 5 pm I went out to the barn to do my hourly goat check and when I came back in he had stopped breathing and passed.  Even though we were able to warm him up and get some nourishment in him, it was obviously too little too late.  In hindsight (of course) I should have brought him in last night knowing it was going to be so cold out.  I knew he was smaller than his sister and not as fat, but I figured he would be fine with the sweater, under the heat lamp, in a pile with the other goat kids.

That last goat check I did before he passed took longer than my usual, "Nobody's dead, everyone's running around looking good" because I had just in the last hour put Penny in the just cleaned out kidding pen.  And she was in labor.  Not moaning or grunting labor, just laying down & getting up & laying back down so I knew it was close.  I went inside to cram some cold asparagus and broccoli in my maw (which was what was left of supper after Rhiannon & Paul ate) and was about to grab a drink when I heard definite goat labor pains over the baby monitor.  I put my still-warm coat back on, yanked on my muck boots and headed back out to the barn to see Penny laying on her side and a head and two feel sticking out her backside.  I resisted the urge to immediately help and let her push a few more times before finally giving in and hooking my fingers over the feet and gently pulled when she pushed one last time.

I wiped most of the goo off and put the kid in front of Penny, who didn't seem the least bit interested.  I got some of the goo on my finger & put it on Penny's nose and she still seemed kind'a dazed.  When the kid finally let out a yell something must have clicked and she started licking it.  I helped her dry the kid off since it was still cool outside and the kid was frantically searching for milk.  But Penny still stayed on her side.  I thought that maybe she had another kid in there but there wasn't.  This kid was hungry and Penny didn't know what to do, or didn't care.  So I got a scoop full of grain, put it in a bowl on the opposite side of the kidding pen and Penny immediately got up.  At which point I brought the kid over to her and helped her find her first meal.  Which wasn't easy, as anyone who has ever tried to "help" a baby goat find the teat, especially since Penny kept kicking and moving away.  More interested in the bowl of grain than her newborn. 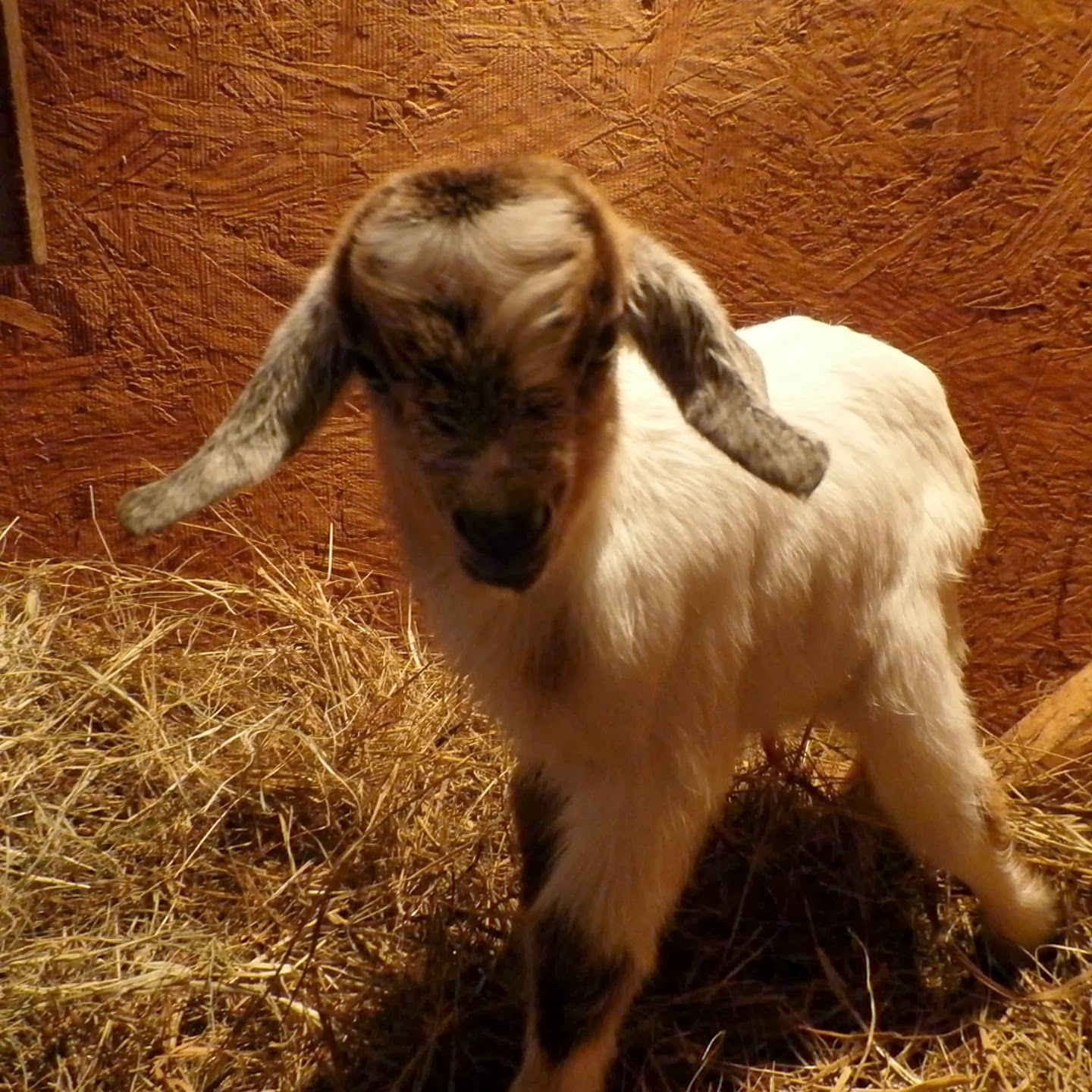 After the grain had been consumed, she calmed down a bit and eventually let her little doeling nurse (I even forgot to check if it was a male or female until just then).  I went back in to clean myself off and tend to the supper leftovers and dishes and brought a goat sweater back out with me. 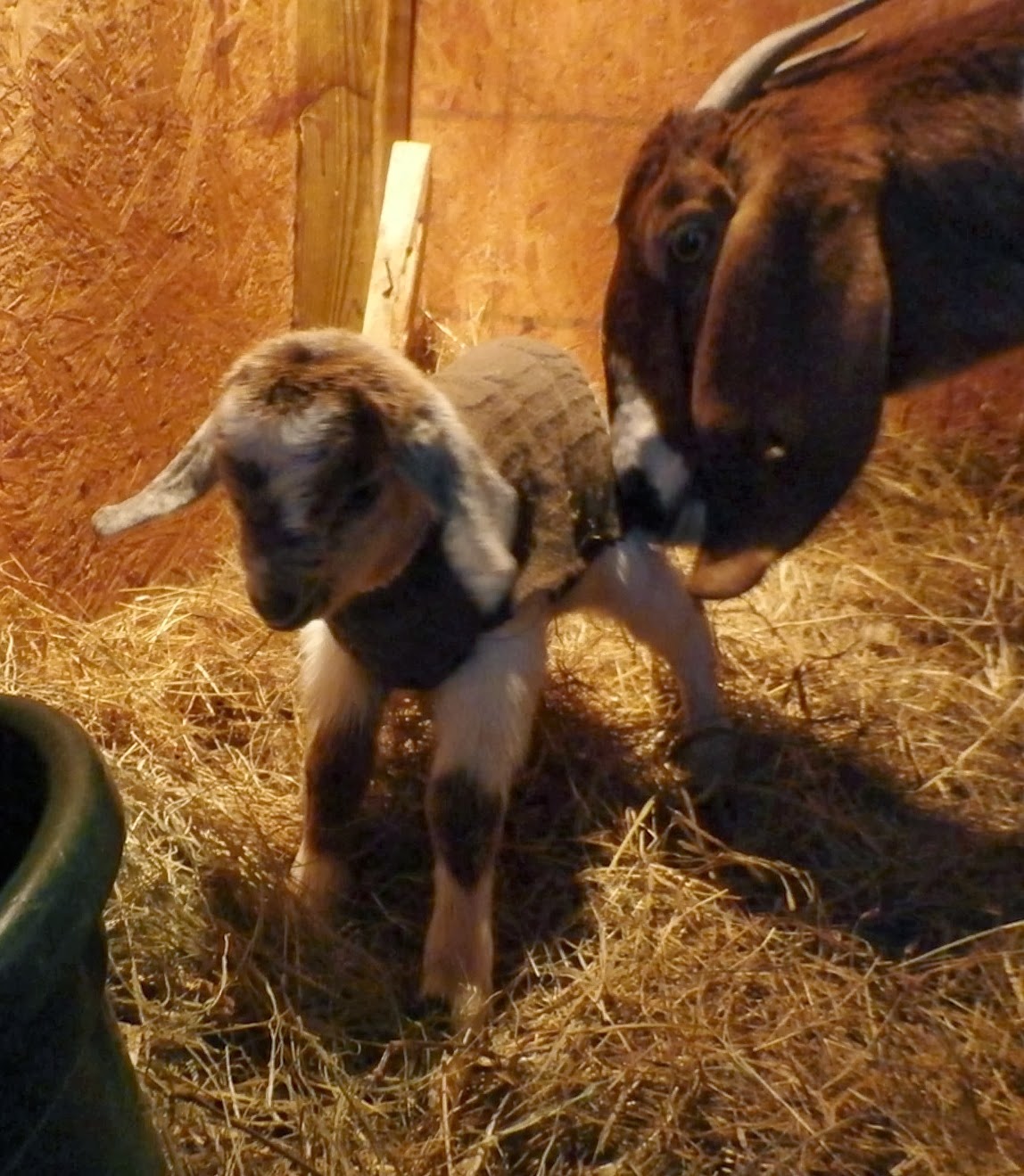 Penny & her doeling seem to be doing ok.  I'm not overly impressed with Penny's mothering skills, but she is a first timer.  I hope she does better as the days go on.  Tonight I'll be tuned into the baby monitor and be making more frequent visits to the barn to make sure nobody is getting too cold and bring the mothers into the barn to provide some late night warm milk snacks for the kids. Last night was 7 degrees, tonight is going to be "warmer" but still only 19 degrees.  I didn't want to have to bring kids in the house, but I'm not going to lose another one to the cold so I'll be checking on them throughout the night.
Posted by Carolyn at 10:43 PM