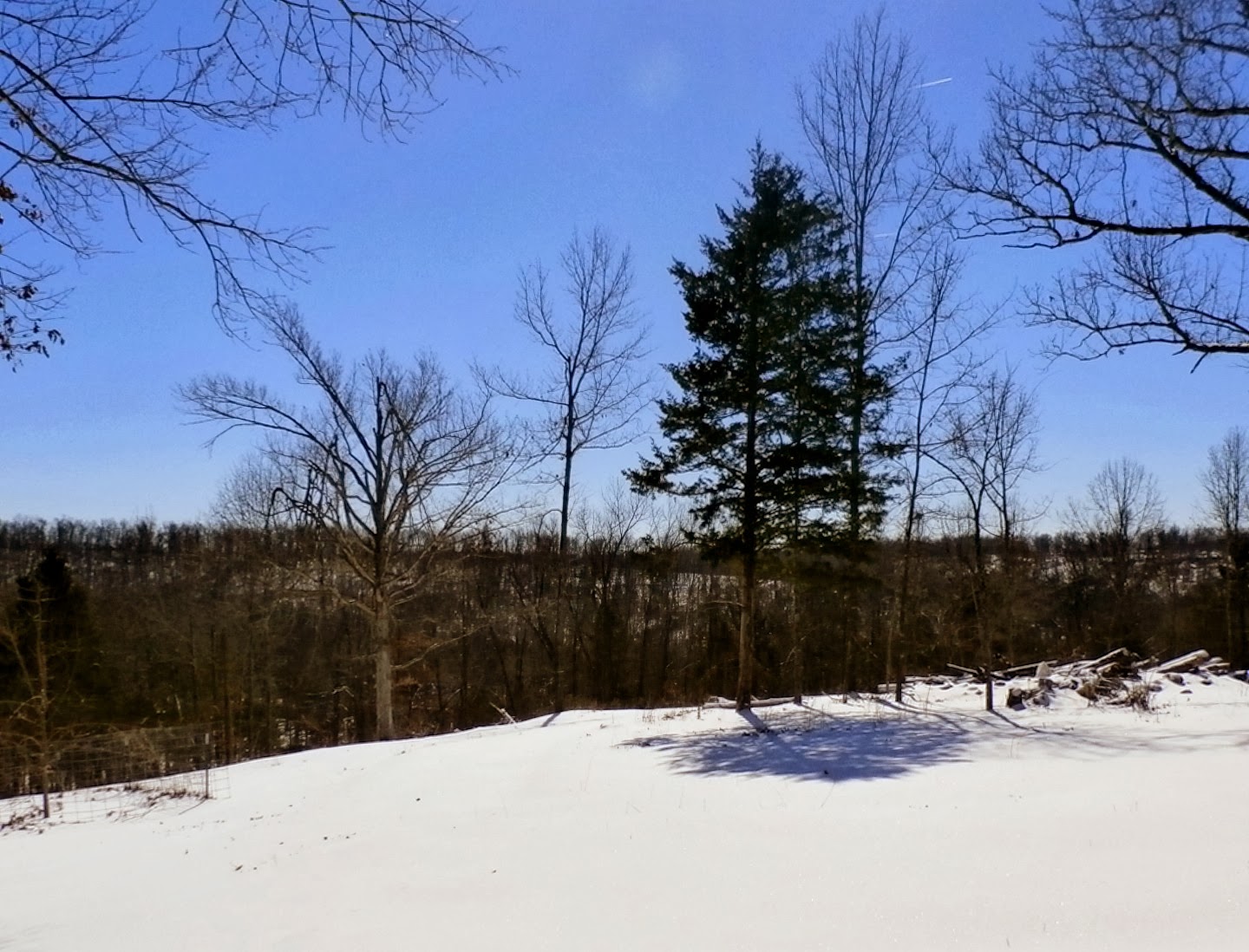 Getting real sick of this winter stuff.  Not one, not two, but three ice storms this year.  Fortunately none nearly as bad as the one that left us without power for two weeks back in February of 2009, but still annoying as heck.  We'll hit a low of around 10 degrees tonight, then slowly make our way up to above freezing tomorrow afternoon.  Then almost sixty by Friday.  Ah, winters in Arkansas.

The baby goats aren't really sure what to think of all the snow.  They mostly jump in & out of it then make their way back in or under the barn where there is none of that cold, white stuff or run out to where momma is to grab a bite to eat and go back. 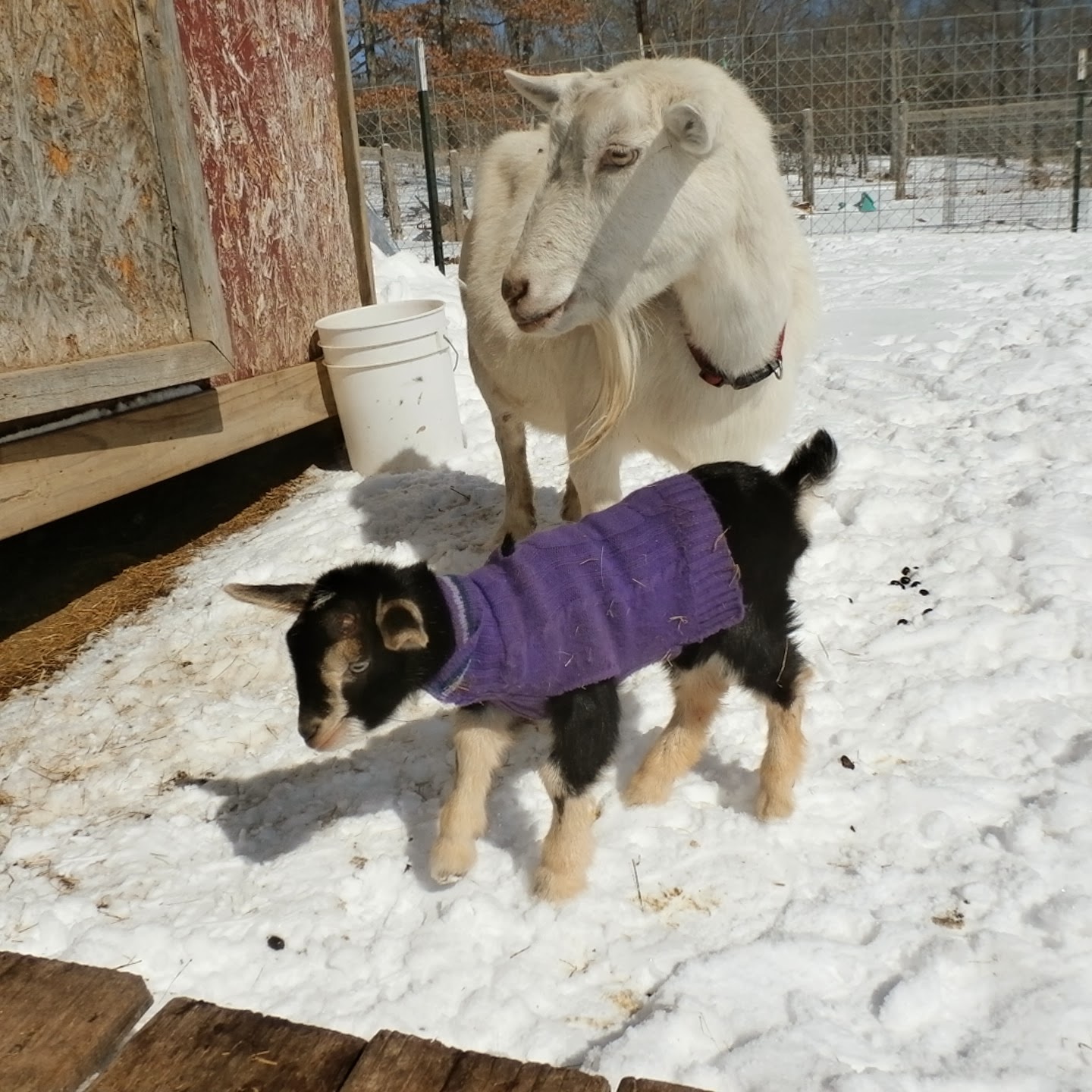 I tried to shovel a path for the stupid chickens to get to their feeder, but there's a layer of ice pellets underneath so it still looks like snow to them and don't like to venture out in it.  I put a bowl of warm water and scoops of scratch under the barn where they're hiding out and called it "good enough".

Hauling warm water to the goats & chickens is what usually fills my barn chore list on below-freezing days.  I can chip ice out of the stock tanks, but they usually only sip at the water.  When they seem me hauling buckets to the pen, everyone comes a'running for a warm drink.


Most of the goat kids are doing well.  Everyone has a sweater (a few with some rather ugly SpongeBob patterns) and seems to be doing fine as far as the cold weather.  Pickles buckling, however, is still having problems standing.  Paul splinted his back legs with a plastic brace this time and it seems to be doing the job, but now his front legs aren't keeping him up; they splay outwards instead of just forwards now.  So I'm still having to go out there every few hours to help him nurse.  Both Paul & I have seen him semi-standing under Pickles and nursing, but not often.  At first I though I was doing him a disservice by helping him so much because it seemed that he was doing better and using those muscles, but now it almost seems like he doesn't even want to bother trying to get up.  He's yelling plenty (imagine that, one of Pickles' offspring a yeller) and has a full belly, but I don't know what I'm going to do about his inability to walk on his own.

I've read several places that this floppy leg thing wasn't that unusual and that it would clear itself up in a few days, but that doesn't seem like the case here.  Pickles had kidded a week early so I was figuring being premature that he'd need a little more time to get things worked out, but his sister is doing well.  She's also noticeably fatter than he is which I suppose shouldn't be that much of a surprise as she is able to walk up to Pickles and nurse whenever she wants while he has to wait until I help him.  I've been told to give him some Bo-Se as supposedly a selenium deficiency could cause his problems, but I haven't been able to get to the vet to get any and seeing as I won't be able to actually get out of the driveway until probably Wednesday it will have to wait until then.  If there is no improvement in another week I'm sorry to say that we'll probably have to cull him.  Sorry to have to kill a kid goat and sorry that we'll lose out on a good supper.  Probably a hypocritical thought, but oh well, that's how my mind works.