This is a fairly new invader to our garden: 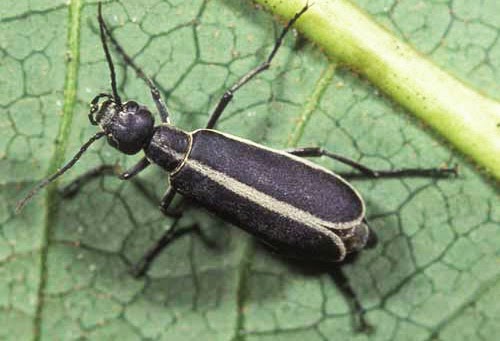 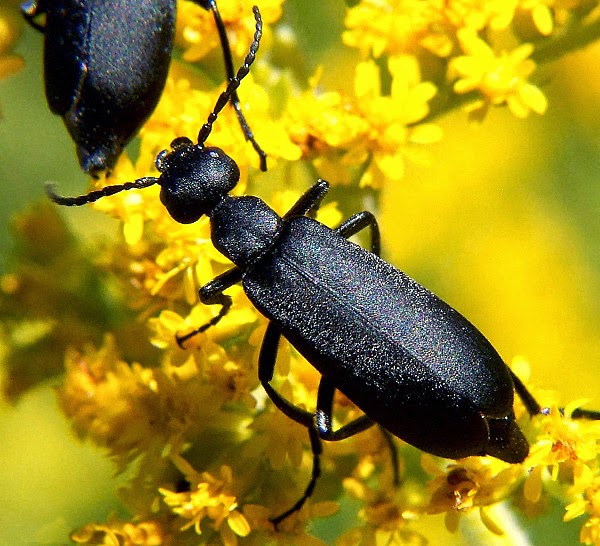 I do recall seeing them in a patch of wild amaranth (pigweed) about five or six years ago and remember them having a strange habit of dropping off the plant as soon as you even tapped it, trying to make their escape.  I also recall seeing so many of them that I started to collect them for the chickens.  Which they turned their noses up at.  And I yelled them for being ungrateful bastards at not accepting my offering of a free bug smorgasbord.  Only now did I realize that they did so for a reason.

There are many varieties of blister beetles and apparently we have the black variety.  I didn't think much of them since they didn't seem to be eating anything but the wild amaranth.  Then a few days ago while trying to find the hornworms that were eating all the leaves off my tomatoes, I found a bunch of the blister beetles congregating on the tomato plants.  And non-hornworm black poop underneath them.  They were the ones defoliating my tomato plants!  Bastards!

So I donned my rubber gloves and started removing them from the area.  Normally I'd just start crushing them between my fingers like I've been doing with the squash bugs, but luckily for me, I hadn't done that yet.  Because as it's name implies, I would have a mess of blisters on my hands.  Blister beetles have a nasty little goo in their body called cantharadin and when it gets on your skin you get a blister.  Even when they are dead and pulverized they still pack a nasty punch, especially to livestock.  If you're a horsey person, you've probably heard of the potentially deadly effects of having your beloved Mr. Ed eat blister beetle infested alfalfa.

And I'm sure most people have heard of the aphrodisiac "Spanish Fly".  Guess what's in it?  Dead, dried and crunched up blister beetle.  A little bit and you're drooling over the guy/girl next to you and a little bit too much and it's your mouth that's on fire instead of your groin and you're dead in a few hours.

So needless to say, I have a new found respect for the little tomato plant munching bug.  Still don't like him.  Still going to kill every single stinking one I find.  But I will be much more careful next time I run into an unknown bug before I start squishing them with my bare hands.
Posted by Carolyn at 10:27 AM