End of The Great Pantry Challenge

Well, I made it through an entire month without going to the grocery store.  Technically, there were a few places that I “cheated” and I don’t think I’d be able to sleep if I didn’t confess these to you.  Well, not really, but I didn’t want to be a big-stinky-liar either.
The main area where I cheated is when I’d have my Mom bring over a few bananas and apples for Rhiannon when she came to visit.  I guess I didn’t really cheat as I personally didn’t go to the store, but a store-run was still made on my behalf.  But I don’t feel guilty for it because those items were for Rhiannon.  She loves her apples & bananas and I didn’t want her to go without just because I was trying to stay away from the store.
Rhiannon and I also went out for dinner twice.  My Mom’s church has a Wednesday night dinner and sermon each week and I like to take Rhiannon there at least once a month.  We don’t have her enrolled in any homeschooling group yet, so this is a good time for her to play with some kids her age.
So basically, it’s all Rhiannon’s fault!  Yeah, I know, how low can I go to blame it on a two-year old?  Anwyays….
The last part of our Challenge was Shelf Stable Items Only.  In recipes that called for milk or eggs, I used the powdered stuff and I used oil instead of butter.  Here are some of the dinners we had:
Salmon Patties with Cream of Mushroom Soup, homemade bread, sautéed green beans or canned corn.  I made a LOT of Salmon Patties so we had this two nights in a row.
Chicken breast (canned) with mashed potatoes (flakes) and gravy (made from bullion cubes), canned corn and stuffing.  I had bought the canned chicken a month ago in anticipation of the Challenge as I’ve never had it before.  The meat itself was ok, but it was definitely too salty.  I’m hoping to try my hand at canning our own chicken this fall.
Tuna Noodle Casserole.  Canned tuna, canned corn, peas, beans, carrots, egg noodles, cream of mushroom soup, powdered milk & breadcrumb topping.
Spaghetti with breadsticks.  Homemade sauce using tomato paste, canned tomatoes, sugar, spices, etc.  Homemade garlic breadsticks.
Chili & Cornbread.  Used a mixture of dry pinto & black beans & canned chili beans.
Veggie Stir Fry w/Rice.  Used canned veggies, but cheated and I used some fresh cabbage, although I suppose cabbage could be considered somewhat-shelf-stable if kept in a root cellar.  Using canned veggies in lieu of fresh wouldn’t be my first choice, but it was still quite edible.
Spanish Mac & Cheese (homemade mac & cheese using powdered milk, powdered cheese, oil, and added a can of diced tomatoes & chilies) with a side of Pinto Beans w/dried onions and slices of Polenta.
Homemade Beef & Barley Soup w/canned Veggies with homemade bread.
We had oatmeal, fruit and toast or granola for breakfast.  Lunches were usually soup & bread, leftovers or PB&J sandwiches (for Rhiannon).  We had cookies, corn bread or canned fruits for dessert.
So all-in-all, I think The Great Pantry Challenge went fairly well.  It definitely made me realize how many unnecessary trips I made to the grocery store and I’m hoping to keep up with my new reduced-outing schedule.  At the beginning of the month I started a grocery list and have been adding items throughout the month so we’ll have to make a grocery run in the near future, although I’m going to put it off as long as I can.  Given the icy road conditions and freezing temperatures continuing through the week it’s not like I’d be going out anyhow.
Here’s a recipe for the Polenta I made: 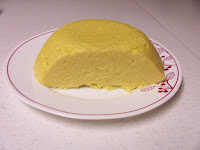 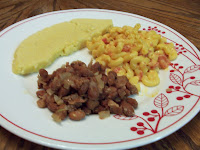 Take 2 cups of cold water & completely mix 2 cups of cornmeal into it.  Set aside.  In a large pot, boil 4 cups of water with 1 ½ tsp. salt.  Slowly add the cornmeal mixture to the boiling water, stirring constantly.  When all the cornmeal is added, turn the heat to low.  Continue cooking the mush for about a half hour, stirring frequently so it doesn’t burn.  Just before the half hour is up, add 4 Tbsps. of butter and 1 Tbsp. sugar & stir until completely mixed.  Grease a bowl with butter or non-stick spray & pour the mush into the bowl.  Let set for about 10 minutes, then invert bowl onto a plate & the polenta should keep the shape of the bowl.  Slice & serve with butter, cheese, salsa or anything else that sounds yummy.
Posted by Carolyn at 1:40 PM