I finally found out where the Splatted Eggs were coming from (click "Here" to go to the original post).  I got out to the barn a bit later than normal this morning so when I let the chickens out of their coop, one of them ran with me and the goats to the goat parlor.  As usual, Nettie jumped right up on the milking stand for her morning snack but right behind her was my youngest Australorp hen.  The hen flapped her way up onto Nettie’s back, onto the headstall, up on a shelf & then flap-flap-flapped her way up to the rafters.  Or is it called eaves???  Whatever. 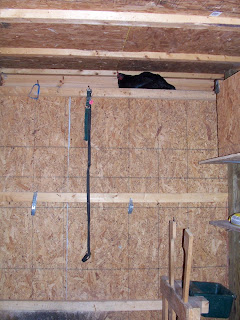 Yeah, so I'm up here.  What you going to do about it?
The hen started doing the “I’m gonna lay an egg” routine.   Turning in circles, scratching at the soffit board, turning in more circles, scratch-scratch-scratch, and then seemed to hunker down for business.  I pulled her out of there and put her on a nest of hay that the other chickens use for laying their eggs.  I did this three times.  Since she wanted nothing to do with the fluffy “normal” nest, I finally gave in and let her lay in peace up there one last time so I ran into the house to grab my camera.  I thought that by time I got back she would have laid her egg & it would be in the typical “splat” pattern on the goat stand, but she was still circling & scratching when I got back.  For.  Like.  Ever.
She eventually laid her egg.  At one point I actually sat down on a bale of hay, wondering if she was ever going to pop out my breakfast for tomorrow morning (sounds kind’a gross when you think of it like that, hugh?).  But it seemed like I was waiting out there for an eternity.

Can't a girl get ANY privacy???
Whoever coined the phrase “A watched pot never boils” obviously never had chickens.
Paul's Take
Stupid chicken.  When are you going to close off the milk parlor so the hens stop laying in there?  The proper place for the hens to lay is in the nest boxes.  I made those nest boxes in the exact dimensions as specified by the National Chicken Keepers Guidebook and they should be laying in those instead of all over the place.  You really need to clean out their coop more often.