Nettie and Annette are both very vocal and affectionate when they are in heat.  The also do a lot of tail flagging and get a bit pink in the behind, so it’s not too hard to tell when they are in season.  Last year I had trouble figuring out Ishtar’s cycle.  Pan wasn’t within sight of the does last year.


This year, Pan is up next to the rest of the herd, but still separated by fencing.   Ishtar has been in heat at least three other times this season, and each time it was pretty obvious.  She would be pacing back and forth along the fence line, shoving her head through the panels and getting covered in stinky-buck smell as Pan was more than happy to paw at her and rub his head all over her.
Ishtar is a big Saanen, larger than her mother Nettie.  I was hoping to have Ishtar bred to a Boer this year (and last year), but I have yet to find anyone with a Boer for stud and there’s no way I was going to buy another buck, especially a standard sized breed.  It’s hard enough wrestling Pan who’s a Nigerian Dwarf buck; I couldn’t imagine messing around with a Boer buck.
My intentions were to start up our own meat goat herd using Ishtar as the dam and a purebred Boer as the sire.  Basically I want the offspring to have her large frame, but with a meaty build.  Any female offspring from that breeding would be kept as breeding stock and bred back to another purebred Boer buck.  The males would go into the freezer.
Since I once again struck out on finding a Boer for stud, I let Pan breed Ishtar.  It’s not that I don’t like the kiddings from that match; Ishtar’s kids are nice mini-milkers (F1 Mini-Saanen).  But I’ve got enough milkers.  I want meat.  Goat meat.
Anyhow.
Ishtar is also the Alpha doe, or Herd Queen of our little herd.  And she rules with an Iron Fist.  When it comes to milking time / feeding time, there’s no doubt who’s top goat.
When I decided that I’d have Pan breed Ishtar, we did the normal goat-date thing.  I put the doe on a lead, take her to Pan’s enclosure and let the goat-luv’n begin.  That usually entails Pan running around, making those spitty-flappy-lip goat noises, pawing, ear-nibbling and the like, eventually ending with a good connection and DNA swapped.  I’ll hold on to the lead the first few minutes to make sure everyone is “satisfied”, but eventually unclip the doe and let the two have some private time together.
But apparently Ishtar was not satisfied with being the subordinate goat.  As soon as I unclipped her lead, she started chasing Pan around the pen.  SHE was making the snorty noises, pawing and mounting HIM!  And I don’t think he was too fond of it either as he kept running away.  At one point he even tried to hide behind me.  But being the closet masochist that I am, I let her stay in the pen and have her way with him.
I came back out about an hour later and found them like this: 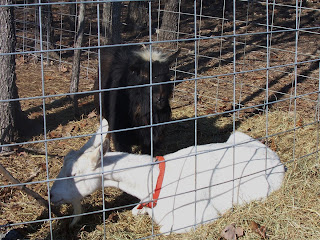 If it weren’t for the fact that Ishtar had just finished a cigarette and Pan was sobbing for me to let him out, it would have been almost cute.
Posted by Carolyn at 3:55 AM