For those of you who may be new to reading my blog, let me first tell you that this is NOT a gross-out or an oh-my-gawd-you-test-cheap-makeup-products-and-baby-shampoos-on-little-fuzzy-bunnies kind of post.  So you may continue reading with a clear conscience.

For my "older" and more frequent readers.....you know better :)  So without further ado, here's the overly drawn out story of animal experimentation here at Krazo Acres:

Remember the Peeps Cake?  You know, the one that could put a five-hundred pound gorilla into a diabetic coma?  Well it's all gone.  Every last bite of it.  But not because I sat in front of it with a fork.  We were invited to an Easter Supper yesterday so I brought the Peeps Cake along, not only because I didn't make anything else to share, but because I know that having that cake sitting here with a confessed ultra-sugar-addict (namely, me) would certainly lead to a disaster.  Or at least another cavity and ten extra pounds to my already supple backside.

Most of the cake was consumed by those gathering at the Easter Supper with the exception of three lonely pieces, which I took home just in case Paul wanted some.  Ok, so I lied.  Paul wanted nothing to do with the Peeps Cake and would actually make a "Bleccch" noise every time he passed it in the kitchen.  It was for Rhiannon and I.  Ok....it was for me.  I didn't get a piece at the party as I had already stuffed myself with various other snackies, ham, bean salad, deviled eggs (NOT made by me), more ham, and other homemade desserts.

Anyways.  The three slices came home with me.  I forgot to bring the plate inside last night so the lonely little peeps stayed overnight in the vehicle.  Paul brought it in the house this morning when he found it sitting in the passenger seat of the car.  Guess he couldn't handle sitting so close to them on his drive into work.  The Peeps Cake then sat on the kitchen counter from about 6:15 am to sometime just after 7:30 am, when I decided that it wouldn't be too much of a diet-killer to have a half-slice of cake for breakfast (so says the lady who's 30 lbs. overweight).

I shuffled over to the kitchen to cut myself a slice of breakfast when I noticed that there were tiny black specs on the cake....and they were moving!!  Ants!  I almost had a hot flash when I saw them.  It's not like I'm afraid of bugs, but the thought of ants crawling on my kitchen counter top is just eerie.  Now don't get me wrong; we have plenty of bugs in the house (much to the horror of my mother) so it's not an uncommon thing to see a bug or two in any given week.

We have spiders, evil green bugs, moths and the occasional wasp or two that make their way in through an open screen door.  We live in a log home in the country in the middle of the woods.  We have bugs.  End of story.  But the weird thing about it (well, one weird thing) is that we've never had ants in the house.  And it's not like there's a lack of crumbs around here or the occasional week-old peanut butter sandwich stuffed under the couch cushions (hey, I have a toddler).  There's plenty of ant-fodder around here.  I guess the super-concentrated mass of sugar on the kitchen counter was just too much for the ants to ignore.

I picked up the cake plate and put it in the sink.  In hindsight, I'm not sure why I did that, it's not like the ants couldn't manage to escape a stainless steel sink.  I then started doing what any other person would do; squishing the tiny buggers with my thumb.  Luckily there weren't a ton of them, definitely under the hundred mark, but it still took a while to seek them all out and render their little exoskeletons into nothing more than a black spec on my counter.

When I was finished sqashing, I sat on the chair and watched.  And waited.  I was trying to find the tell-tale trail of where the ants came from.  All the commotion piqued Evil Kitty's interest so she came up on the counter to check it out.  After several more minutes of only the occasional ant-straggler (Sorry I'm late.  Hey, where did everybo....squish!), I gave up.  But Evil Kitty didn't want to leave the scene of the Great Ant Massacre at Peeps Knob.  She seemed to be searching for more ants, nose down to the counter top and moving back and forth like a little kitty-bloodhound.  I finally tired of her antics and shooed her off so I could wipe up all the insect bodies.  But before I could grab the sponge and spray bottle, Evil Kitty jumped back on the counter.  And I shooed her off.  And she jumped back up.  Like half a dozen times.

Seeing that the shooing wasn't working, I picked her up in my arms and was about to scold her (as if that would make a lick of difference) when she started pushing her face into my hand and fingers.  She was licking and rubbing on my fingers like I had catnip on them or something.  I put her back down and she even did the "psycho kitty catnip roll around thing".    I wiped up the counter, washed my hands and went to pet Evil Kitty again.  She was still interested in my hands, although not as much.  The counter top also didn't prove as irresistible as it did before.  Weird.

A few minutes later I saw several more ants.  Squished them.  And Evil Kitty jumped back on the counter and was sniffing where the ants were.  Then came up to rub her face on my fingers again.  Lightbulb.

Ant guts are like catnip!  How weird is that?  I smelled my hands and they did have a faint odor to them, sort of like a chemical.  I single-handedly found the answer to the Catnip Crisis of 2012!  No more need to grown catnip in your garden; just squish a bunch of ants!  Think I could sell this idea to a pet store?  Me neither.

So even though I'm mildly excited about the discovery of an insect-based alternative to Nepeta cataria, I'm still more concerned about where the said insects came from.  I may never find out; I just hope that was the last of them.

Oh, the Peeps Cake didn't go to waste.  And the chickens didn't mind the ant "sprinkles" either. 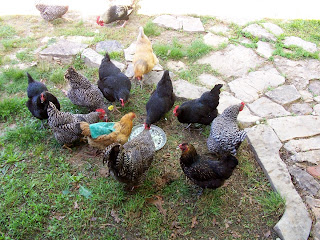