Or my, "Why am I so darned stubborn that I have to try to make everything from scratch?" post.

Not being content with simply walking into a store to buy something, I've been known to occasionally go into a stubborn / cheap / creative fit regarding a number of various food or household products.  I think it started years ago when I first realized that one could make actually make bread.  Like, at home. With little more than some yeast, flour, salt and water.  It was just the beginning.

Then there was soap.  And lotions and salves.  Not to mention the ever increasing number of previously-purchased-in-the-frozen-food-isle side dishes and meals that I could now make.  Every year I was increasing my portfolio of homemade, homegrown or handcrafted items.  And it felt good!  When I made soap, I felt like a chemical engineer.  When I made creamed spinach, I felt like a gourmet chef!  When I harvest wild edibles or homegrown fruit, I feel like a botanist!  Handmade greeting cards, and I'm an artist!  Yearly vaccinations for the goats and I'm a veterinarian!  You get the idea.

The act of doing, making or creating something that "normal" people would only trust a paid professional to do or only buy if it came packaged in plastic at a store is a very empowering feeling.

But creativity can be exhausting.  And an exhausted homesteader is not a very productive homesteader.  So in order to keep myself from wasting away to nothing (insert really, really big eye-roll here), I needed some sustenance.  But bread and butter or fried eggs and pork sausage wasn't going to hack it.  I wanted something sweet and exotic.  And I had the makings of it on my counter top, awaiting deposit into the chicken bucket.  But instead of becoming poultry feed, I was going to use it:
I washed the orange peels, sliced the white pith from it and cut them into thin strips.  Put them into a pot with water & brought it to a boil.  Drained the hot water, put more water in and brought that to a boil.  After the second boiling, I emptied the hot water again and put the peels in another bowl.  One cup of water and three cups of sugar went into the pot and when that started to boil I put the peels back in.  Lowered the temperature on the stove so the sugar syrup and peels just simmered and stirred them for about an hour.  When the peels start to look translucent, they are done.  I lifted each peel out of the hot syrup using tongs and placed them on a drying rack for over 24 hours until they were dried.

The next day, I dumped a bag of chocolate chips into my little double boiler and melted them to coat my orange peels. 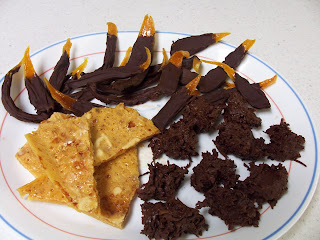 The other two candies were "bonus" treats.  There was still chocolate left in the pot so I took some of the leftover shredded coconut from my Peeps Cake and threw it in to make coconut haystacks.  The other peanut-brittle looking thing was made from the sugar syrup; now delightfully orange-flavored after having simmered the peels in it.  I brought the orange syrup up to soft-crack stage, added a teaspoon or so of baking soda and poured it onto a greased baking sheet.  Kind of turned out like a brittle or deflated sponge candy.

Luckily I had the good idea to put most of it in a container in the freezer or I would have eaten the entire lot of it.  Although frozen candies are just as good.
Posted by Carolyn at 10:43 AM