I love creamed spinach.  Unfortunately the extent of my culinary experience with it had been in a Green Giant box in the frozen foods section, although it's probably been close to ten years since I've had it so who knows if it's still as "good" as I remember it.  I don't know why I hadn't made it myself.  Maybe because I was too cheap to buy the cream and spinach for it.  Maybe I was afraid I would end up eating the entire dish by myself.


But now I had a small but steady amount of cream on hand as well as both spinach and lambs quarters growing like crazy in the raised beds.  What better time to make myself a batch of my beloved and long forgotten side dish!

I picked a bunch of lambs quarter and rinsed it off & chopped it up.  Then proceeded to scour the internet for Creamed Spinach recipes (there wasn't much of anything on recipes containing lambs quarters).  As usual, I didn't actually use a specific recipe but gleaned bits and pieces from a bunch of them, trying to determine what I thought would work best.

I don't remember exactly what the measurements were, but basically I sauteed some onions and garlic, then melted some butter and poured in a cup or so of cream.  Added my chopped lambs quarters and a few sprinkles of salt and heated on low until the greens were wilted. 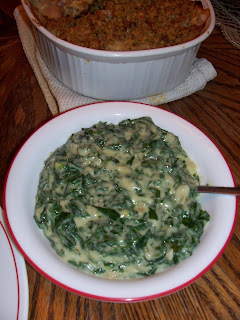 And I ended up eating the entire dish (minus a small serving for Paul) in two days.  It was just as good warmed up the next day.

It's so nice to have an old friend for dinner!  Now the real test will be serving it to my Dad.
Posted by Carolyn at 8:34 PM