State of the Hen House Address

I know I'll be saying I wish I had some broody hens next spring, but for now, I'm glad that mine are finally over their broody behavior.

The first hen hatched out eight eggs and six chicks survived.  Not too bad of a chicken mama.  Except she deserted her brood after only three weeks.  I had her and her chicks locked in the kidding pen, but after a few weeks she started flapping her way over the door and joining the flock.  She would come back at night to sleep with the chicks, but eventually even gave that up.

The second hen (who managed to eat almost her entire unborn brood) hatched out a single chick.  I put her and her chick in the kidding pen with the abandoned chicks.  At first, the hen chased the older chicks everywhere, but after a day or two she got bored with chasing them around.  And after a week and a half, got bored with staying in with them at all.  Flew the coop.  Great.  Now I hand deliver her back to her chick each night so they can snuggle.

About a week later, the third broody hen (who crushed all but three eggs in her clutch) hatched out a single chick.  There were actually two more eggs underneath her, but I took them away after two days as she still wanted to sit and wasn't paying much attention to the newly hatched chick.  I candled the eggs and one was a dud and the other I wasn't sure of.  So I put it in the incubator and sure enough, two days later there was a chick peeping inside.  Not sure of the reasons for the long delay between hatchings, probably somebody sat in her nest and laid an egg after she started setting.  Anyways, I took the not-quite-out-of-the-shell chick and shoved it underneath the hen at night and crossed my fingers that she didn't freak out and peck it to death.  The next morning I went out there and there were two fluffy chicks, one four days younger than it's sibling, but doing well.

Because I'm a glutton for punishment,  almost two weeks ago I filled up the incubator with forty-five eggs and turned it on.  Twelve eggs have already been tossed because they were infertile, and I'd guess that about another dozen are "maybes".  I erred on the side of "hopefully a good maybe" for those and kept them in the incubator.  No skin off my back if they are in there and if I'm lucky, my candling guesses were incorrect and some of those "maybes" will turn into live hatches.  I'm hoping to have better luck than my spring incubating efforts (i.e. only two darned live chicks out of over ninety eggs).  It feels like I just stopped worrying about eggs and chicks and brooding and now I go ahead and started all over.

But there is a method to my madness.  Really.  Hear me out...

We usually order Cornish cross meat birds in the beginning of September for butchering in November.  So if I plan my homegrown hatching to correspond with the delivery of the meat chicks, I can put them all together in one pen and brood them all at the same time.  Hopefully, the beginning / middle of November will be cool enough for butchering the meat birds yet still warm enough that the homegrown egg laying chicks will be feathered out nicely and won't require supplemental heat.

So at least I've got something growing this year!  We may not have much fruit or vegetables, but there sure is plenty of protein either running around (meat birds), waiting for collection in nest boxes (eggs), or in the milk pail on our homestead. 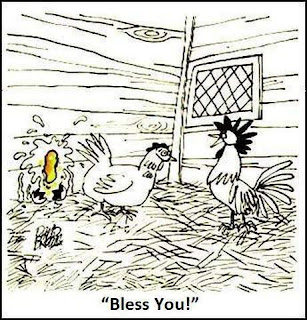