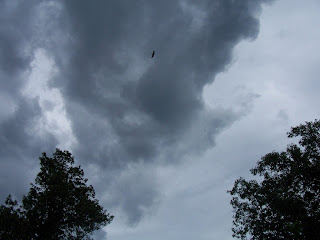 I know that I shouldn't say this, but I was relieved to hear that there was a hurricane south of us.  Not because I'm a heartless bastard and enjoy the havoc that it brings upon those in the gulf area, but because it usually means rain for us.  And we so desperately need the rain this year.  My prayers go out to those being affected by the hurricane though.

Of course, we're going to have to prepare as it's expected to rain for two days here and more than likely that will mean flash flooding along the creeks and rivers, but hopefully the dams will keep up with the excess water as they are about 6' below normal because of the drought.  We're well uphill from the large creek down the hill so there's no chance of flooding at the house, but two days of steady rainfall will mean barn chores will be interesting.

As those of you who are keepers of goats, you no doubt know that they absolutely detest rainfall.  So basically my little herd will be either under the barn or inside the barn.  The entire time even a drop of rain falls from the sky.  Their hay rack is outside of the barn.  Which means that they won't be venturing out to eat hay.  Which means that I'll probably have to open up a stall in the barn to feed them hay.  Which means they will stay in there and mess it up.  I was really meaning to get a lean-to built for their manger and a place they can eat without getting wet, but it got put on the back burner like every other project around here.  And since it rained, like maybe twice during the entire year, this project was forgotten.  Until now when it rains.

The chickens will eventually come out in the rain to forage, but I assume they will take up their usual unfair-weather posts under or in the barn and I'll have to feed them in there also. Which means even more barn animal excrement will mess up the barn.

We did finally get the remaining bales of hay tarped.  Yesterday.  Of course, nothing like the last minute.

I'm also anticipating loss of electricity.  Seems like a squirrel farts around here and the power goes off.  So with the anticipated rain and accompanying winds, I figure we'll lose power.  Hopefully not for too long or I might lose the eggs in the incubator.  Which are less than a week from hatching.

I vacuumed all that I could, did all the laundry that needed cleaning and just came in from finishing up evening barn chores.  I fed & milked the goats about two hours early, not that they minded eating earlier, and took care of the equines earlier than normal.

Time to go around the house and make sure I got candles, matches, flashlights, oil lamps, etc. ready.  If Isaac is on his way to your homestead, are you ready?
Posted by Carolyn at 6:05 PM