Lily & Pickles first potential due date has passed without any sign of labor.  Both are starting to bag up, but Lily's udder is more full.  Not like dairy goat full udder, but definitely larger than they were a month ago.  Pickles still doesn't look very heavy, but I'm hoping the fact that she is starting to develop an udder is a sure sign of pregnancy.  I've been massaging their bellies and haven't been able to confirm a baby in there, which I am a bit surprised at.  When I was massaging Nettie during her bloat incident this past weekend, I was able to feel at least one kid kicking around like crazy.
Next kidding date for Lily & Pickles is on February 28th.

And the day before that, Nettie and Annette are due to kid.  So if you guys don't see or hear from me at the end of February, rest assured that I'll be in the barn up to my eyeballs in afterbirth and wobbly goat kids.

In anticipation of The Insane Goat Baby Fest of 2014, I decided to check how many goat coats I had in my stash.  Last year (or was it the year before??) was the earliest I had ever scheduled kiddings and the nighttime temps dipped into the 30's so I was scrambling to make some sort of goat kid covering and ended up with a butt ugly goat coat..

Susan must have been horrified at my hasty attempt and was kind enough to send me a couple of homemade kid coats.  But even with those two beautiful goat coats and the three dog sweaters I picked up at Walmart end-of-season for like two bucks, I'm still going to be needing a few more.  Four goats due in two days times an average of two kids each and, well, I really need to make a few more goat coats is what I'm getting at.  Although I'm hoping we'll eventually get through these insnae cold-snaps we've been getting, knowing my luck we'll continue this trend just through kidding season so I want to be prepared.

I went through my stash of material and found some fleece blankets that I was eventually going to do "something" with: 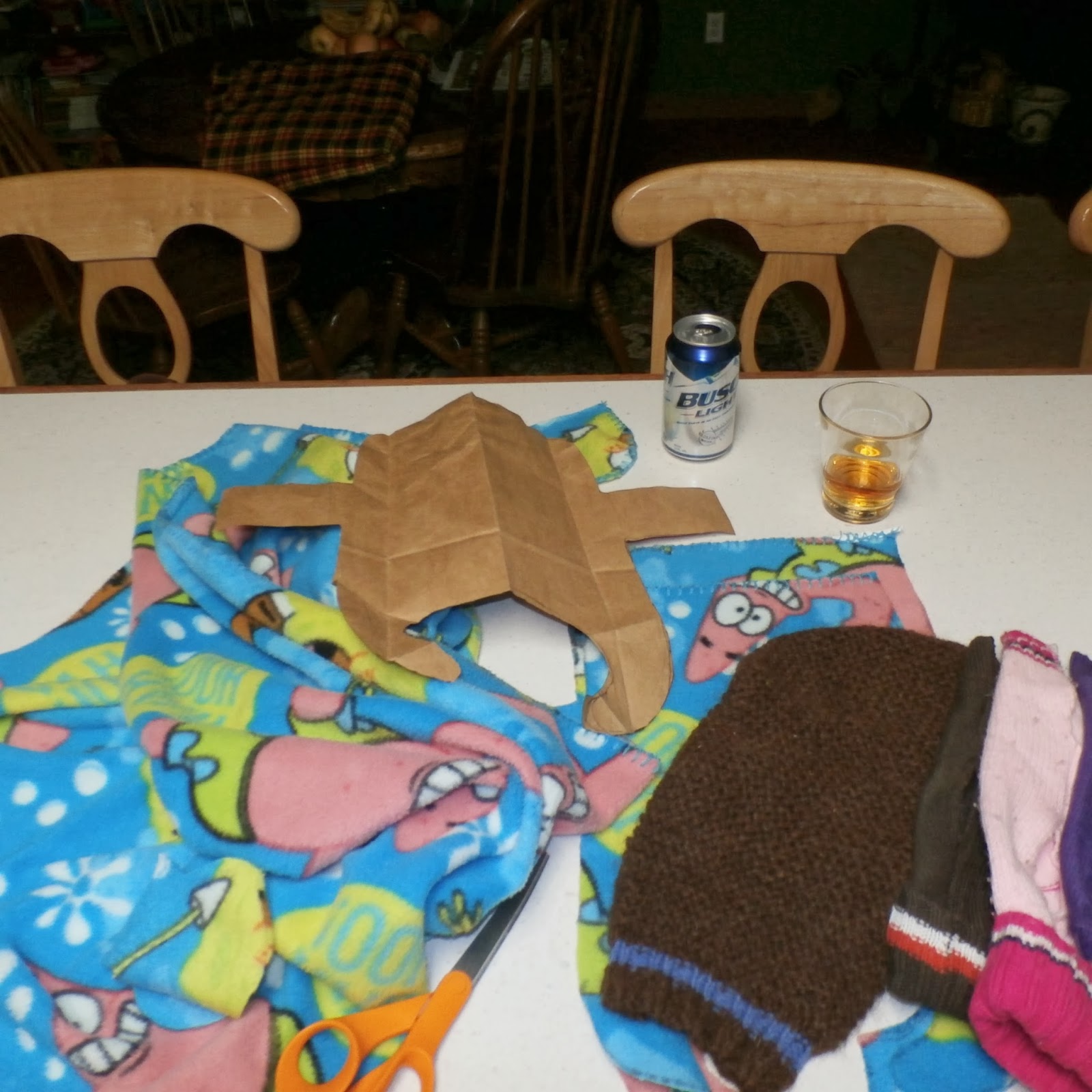 The Sponge Bob pattern was selected as the first prototype, because honestly, I can't think of anything else I'd really want to do with it.  I was going to make Outside Kitty a pillow using it but when I showed it to him he rolled his eyeballs and with an audible "humpff" trotted off, butthole puckering his disgust at the thought of having to sleep on something so silly.

So I'm off to make some slightly-less-butt-ugly goat coats.  I'll let you know how they turn out.  That is, if I manage to finish them before the kids hit the ground.
Posted by Carolyn at 6:30 PM