Nettie went into labor this morning around 10:30.  Early, of course.  It would have been too nice to have her be able to rest for another five or six days before kidding.

First kid had his head presented correctly.  I grabbed what I though were his front legs as they were directly below his head and felt his feet move.  Nettie couldn't push very hard because of her condition so I helped.  And tugged, and pulled.  But nothing, like something was stuck.  And something was stuck.  Those weren't his front feet, they were the front feet of the kid underneath and behind him, both trying to get out at the same time.  I lubed up and had to go in, trying like hell to push the other one back in order to get the first one out.  Nettie was screaming (as much as she was able to).

Finally got first kid out.  Dead.

Grabbed a hold of the second kid's front feet again & looked for his head.  Where the hell was his head?  I was certain these were front feet, why couldn't I find his stinking head?!?  It was bent soooo far back that I was sure he was going to be deformed and/or dead.  I tried like hell to get his head around, but couldn't.  Nettie was yelling as much as she could.  Paul was holding on to her front end while I tried & tried & tried to move the head around; there was no way that the kid would come through her pelvis (or birth canal, or whatever) with his head bent back.  I finally gave up and even though Paul's hands are larger, asked him to try because I could not for the life of me get it around.  Paul tried to no avail.  I went back in after a few minutes (to give Nettie a little rest), and monkeyed around in there for what seemed like forever.  Eventually I managed to twist his neck to bring his head forward; I was certain that I had broken it in the process but didn't care, I just wanted it out of Nettie.  Pulled him out and held him out to drain his mouth/nose/lungs.  No movement, no breathing.  I swung him around just to do it, and was about to put his lifeless body in the bucket with his brother.  Then he moved just a twitch.  So we were on a race to get some life into him.  He was as limp as a rag doll.  No movement in the legs, head, neck; I was still certain that I had paralyzed him and that he was breathing his first - and last - breath of air.  But he slowly became more alert.  I handed him to Paul with some towels and tended to Nettie.  I wanted her to be able to relax now.  She had gone through hell.

But as we all know, it just keeps on getting suckier.  There was another kid in there.  She tried to push, but again I went in.  Breech presentation.  Of course.  But not only breech (as I have easily delivered breech before), but breech with the back legs under, not behind him.  Forfuckssakes.
Had to push him farther back in before I could get even a single back leg back behind him.  I finally managed to get both back legs out & then he came out easily.    And he came out easily as I swear to gawd that Nettie's uterus was now a huge, gaping hole.  I was up to my elbow inside her.  The kid was limp, but I swung him around and he coughed so we got him cleared out and cleaned up.  Nettie wanted to see her babies so badly.  She was softly naaa'ing to them, but couldn't get up to see them or lick them.  We took her babies away from her.  Took them inside to warm them up, to hopefully get them to suck a bottle.  Paul & I took turns with the kids inside and with Nettie outside.  Friends of ours ended up coming by right as we got the kids inside and they helped dry them off and warm them up.  They didn't have sucking reflexes because they were so weak.

I was afraid we were going to have to use a stomach tube to get some colostrum down in their bellies, but we managed to dribble bit by bit of colostrum and Nutridrench down.  Kept doing this for several hours between their naps.  Then, just about an hour ago, they finally "got" the bottle thing.  Thank goodness. 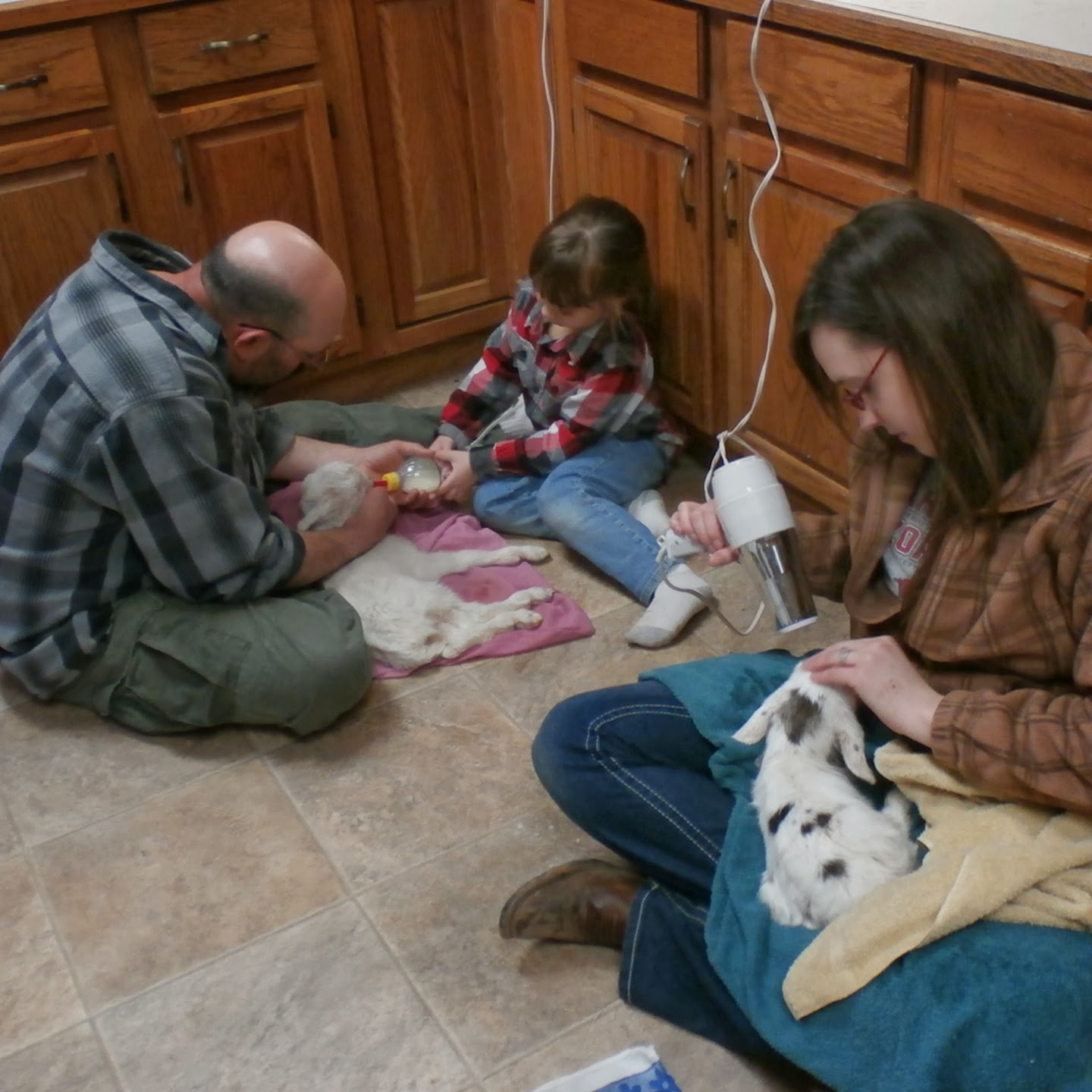 Nettie, however, is a wreck.  She's passed one of the placentas with gentle tugging from me (I know you're not supposed to tug, but I was really only helping when she pushed a bit) there's still one that is half out and I tried to tug when she had a contraction, but then left it as is.  If she hasn't passed the other two by morning I'll call the vet for some concoction to help it out as well as getting something to flush out her udder.  I can't imagine how much damage could have happened or how much "icky" stuff could have gotten up there with all the manhandling of her insides.

She's still not well.  Obviously very, very weak.  I'm continuing her drenching regime of electrolytes, Nutridrench and RedCell, but she really, really needs to get more fluids down her; I'm still debating about using a stomach tube.  She hasn't eaten anything but an apple in almost 48 hours (I think), and although that's something to be worried about, I'm more worried about her becoming severely dehydrated.

I'm off to check on her again.  I hate going out there, I know I have to, and I will, but I feel like such a horrible, horrible mother to her.  Shouldn't have bred her.  This kidding was supposed to be her last kidding.  She's only nine, so I guess technically she had a couple more "good" years of kids, but I was greedy, I wanted one last doeling from her.  And guess what?  Every stinking one of her kids were bucklings.  Guess that's what I deserve.  I just hope that I didn't kill Nettie in the process.
Posted by Carolyn at 7:09 PM