Nettie's fever looks to be under control (102.6 last check).  I'm still giving her two shots of penicillin twice a day (12ml every 12 hours).  But her udder was engorged to the point where it was splitting the skin on the side that was gored.  At first I thought it was just bruising, but Paul said it looked like it was getting worse and that there was actual blood collecting in the left side.  It just kept getting worse and I'm sure the fact that she's been standing most of the time probably isn't helping.  I didn't want to milk her out in fear of rupturing or making her bleed anymore, but I new something had to be done to reduce the swelling.  I wasn't sure if there is some sort of medication that would help or if I should lance the area where the blood was accumulating or what.  So I went into town to sit my butt down at the vet's office, but couldn't get the actual vet to talk to me (although I don't blame him, they were super busy).

My next stop I headed over to the feed store to talk with some cattle people to see if they've ever had a cow with an injured udder.  No such luck there either.  But we were able to come up with sort of a solution for getting her udder drained.

There is a medicine called Tomorrow for treating mastitis in cows & goats.  It's a tube with a thin, plastic tip that is inserted up into the teat orifice and then the plunger is depressed to administer the medication directly into the udder.  So we figured I could use it in the opposite way; squirt the medicine out (into the garbage) and then use the tube to slowly draw the milk out of the udder.

Nettie was finally laying down in the barn so Paul got a towel soaked in ice water and put it on her bruised udder to hopefully reduce some of the swelling. 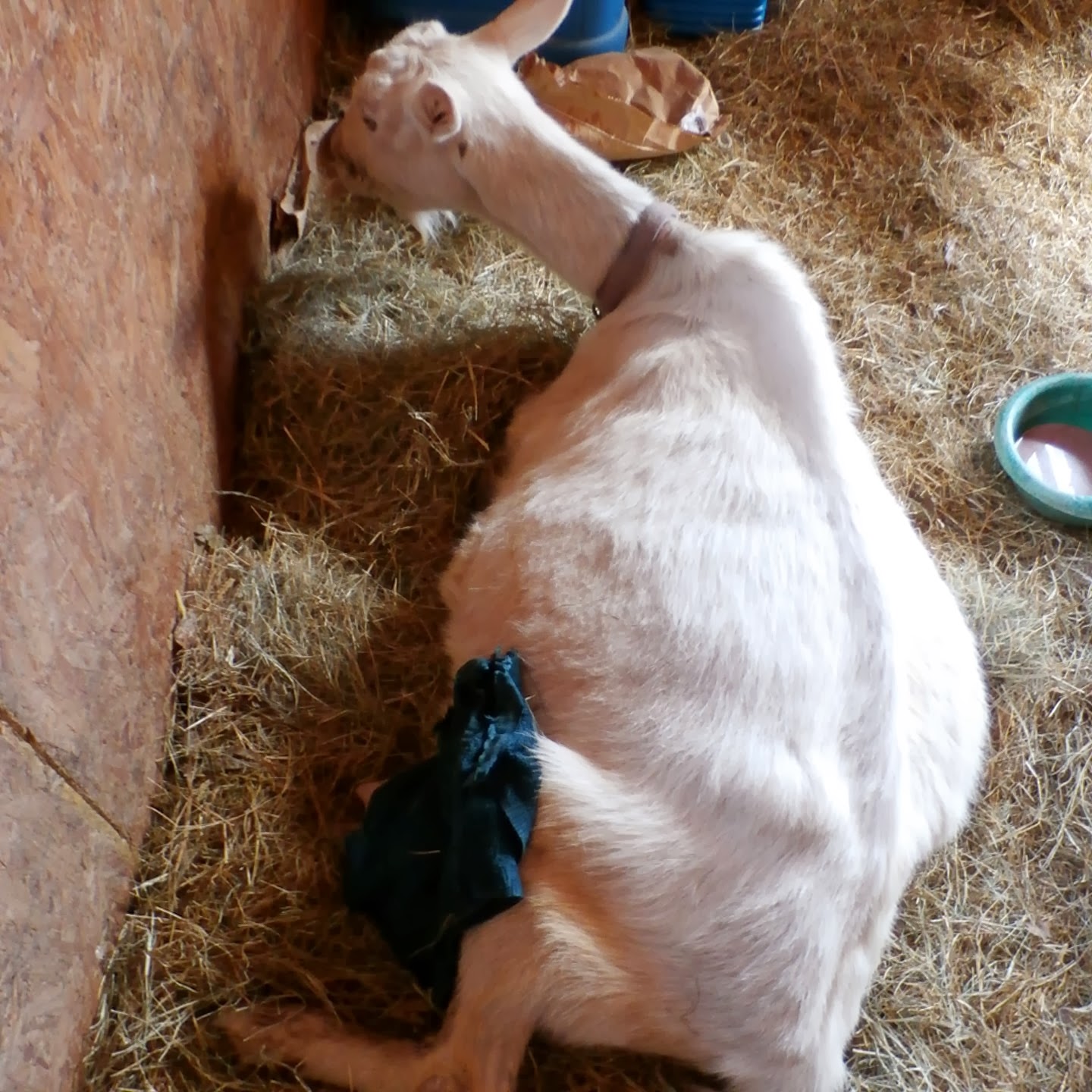 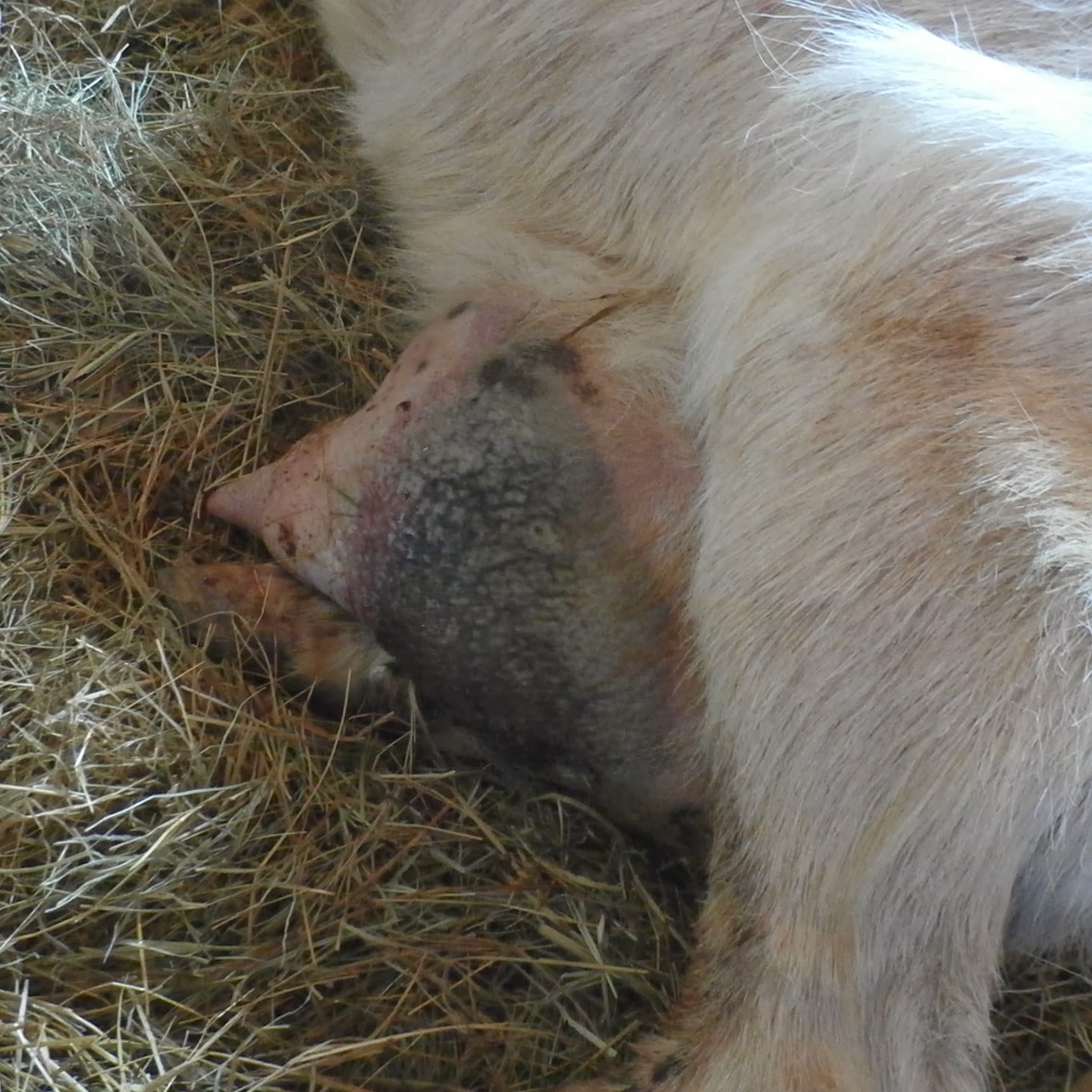 Once she was used to the cold compress, I massaged Nettie's teat in order to relax the orifice.  Amazingly enough, I just put a little pressure on the teat and it squirted.  So I kept slowly and softly squeezing milk out.  Except it wasn't so much milk as it was a mixture of milk and blood: She's standing back up now and I'll go out there once in a while and empty whatever I can from the udder.  She's not eating hay and has only really picked at the alfalfa pellets and handful of grain I gave her.  She ate a few bites of carrot and half an apple, but she needs something in her.  I've given her another round of Probios, B Vitamins and Nutridrench hoping to get her appetite going.

Now we're starting to plan on what to do for her impending kidding.  And there are scenarios going around in my head that aren't nice at all.  If she gives birth naturally, will all the stress cause her to rupture something in her udder again?  Will she even be physically strong enough to go through the labor?  Will any of the vets around her do a c-section for her, and if so, would the recovery from major surgery be more stressful than natural labor?

Then, what happens after kidding?  Assuming the kid(s) are alive, I'm going to have to take them away from Nettie.  Not only am I concerned about her being able to produce blood-free milk by her kidding date, but the kids would end up hurting her udder just by drinking.  Luckily I have frozen colostrum from last year, but I'm still going to have to find a source of fresh goat milk.  Annette is supposed to kid the same day, but she may not have enough to feed her kids and Nettie's kids.

And the worst case (as if it could get any worse)?  Well, let's just say that if Nettie doesn't make it through a kidding here, I've been preparing myself to do an emergency c-section to try and save the kids.
Posted by Carolyn at 3:24 PM