We left, it left

We celebrated Rhiannon's birthday this weekend and took our first "real" family vacation.  Vacation meaning that we were all away from the homestead for more than 24 hours. We were actually gone for a total of twenty-six hours!  I know, it doesn't sound like much, but as those of you who have critters to take care of, getting away for any more than twelve hours at a time usually poses technical difficulties.

I  occasionally farm-sit for a friend down the road so I asked her to return the favor.  The goats still weren't due to pop so there were no kiddings to (really) worry about and since the weather was only supposed to dip down into the mid-to-low 30's at night, there wouldn't be much ice, if any, to bust out of water buckets.  She just had to close up the chickens at night, come back in the morning to let them out, feed everyone breakfast and make sure nobody was dead or dying.  It's really not hard to do, but somebody does have to do it.

The morning of our trip, we crammed the car with much more stuff than one would normally feel obligated to bring for just an overnight stay, I fed everyone in the barnyard their breakfast and then we left for the bright lights and bit city of.....Branson!  It's off season, so there were quite a few attractions that weren't open, but Rhiannon didn't care one bit.  She was ready to go swimming!  No, I didn't let my daughter swim in the frigid waters of Table Rock Lake; we went to an indoor water park / hotel.  Where Rhiannon had a blast.  And not only at the actual water attraction.  She was just as amazed and had as much fun just in the hotel room (which she kept calling a show-n-tell-room for some reason).  Two beds!  Teeny-tiny refrigerator!  And a TV (with cartoons!!!) that you could watch.....while in BED!  Then we told her we were going to have breakfast the next morning in the hotel, her eyes widened to saucers and she said, "They make you breakfast here?!?"  She was totally blown away.

After several hours of water park fun, we drove down to The Landing to Joe's Crab Shack for supper.  Lots of people, lots of lights, lots of noise.  Perfect entertainment for a 5-year old who doesn't leave the farm much. Rhiannon ate her entire steam pot of crab legs and then continued to scarf mine down.  At one point, while furiously cracking crustacean shells in order to keep her insatiable appetite appeased, she chomped down on my finger.  I never knew a child could consume so much seafood at one sitting. 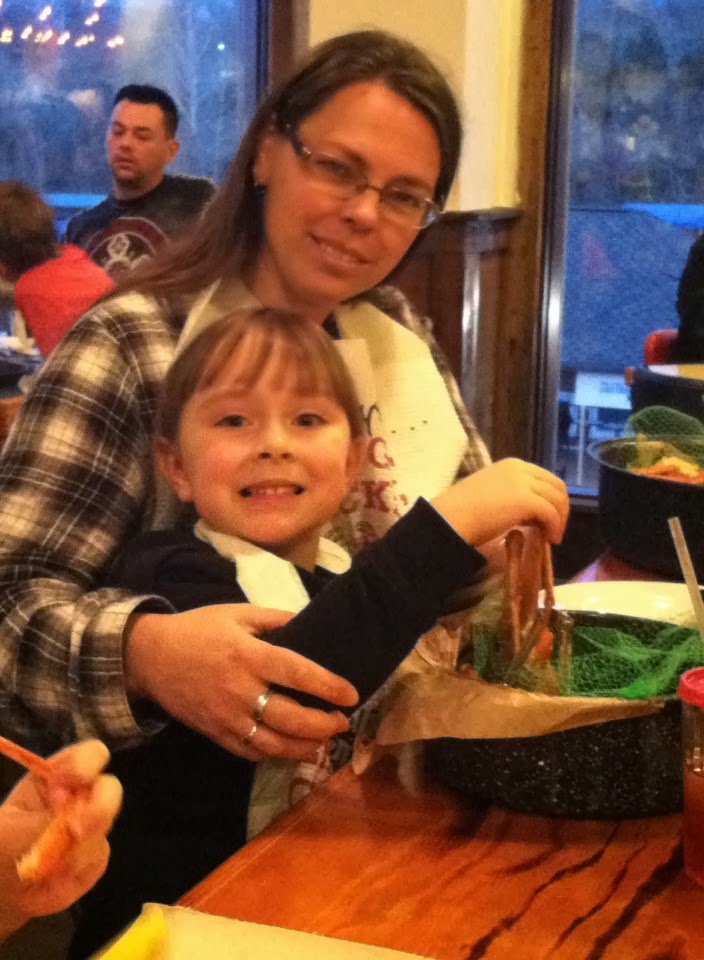 Of course, the next day she was sad to leave.  But I told her that if she was a good girl that we would come back again.  (Although, technically, I didn't say when.)  There are a few places that I wouldn't mind going and I'm sure I can convince both Grandma & Grandpa to come along with us again.

We got home exactly twenty-six hours after we had left.  Everyone was alive.  No kids born.  Charlie and Outside Kitty hadn't run away.  And there was no longer that little patch of ice on the driveway.  The snow & ice had finally left!  And left a muddy, mucky, poop-soupy barnyard mess in it's absence.  Well, it's better than the white stuff.

We (well, maybe not Paul) enjoyed our time away from home but I was happy to be back to it.  Mud and all.
Posted by Carolyn at 11:06 AM