Gett'n Personal with a Pork Chop

We've been without breakfast sausage for several weeks.  Haven't had a ham or pork chop in months.  And bacon?  What's that?  It's been so long since I've fried up a pan of thick sliced bacon that I'm not sure I know how to anymore.

This is the last package of pork-anything in our freezer: 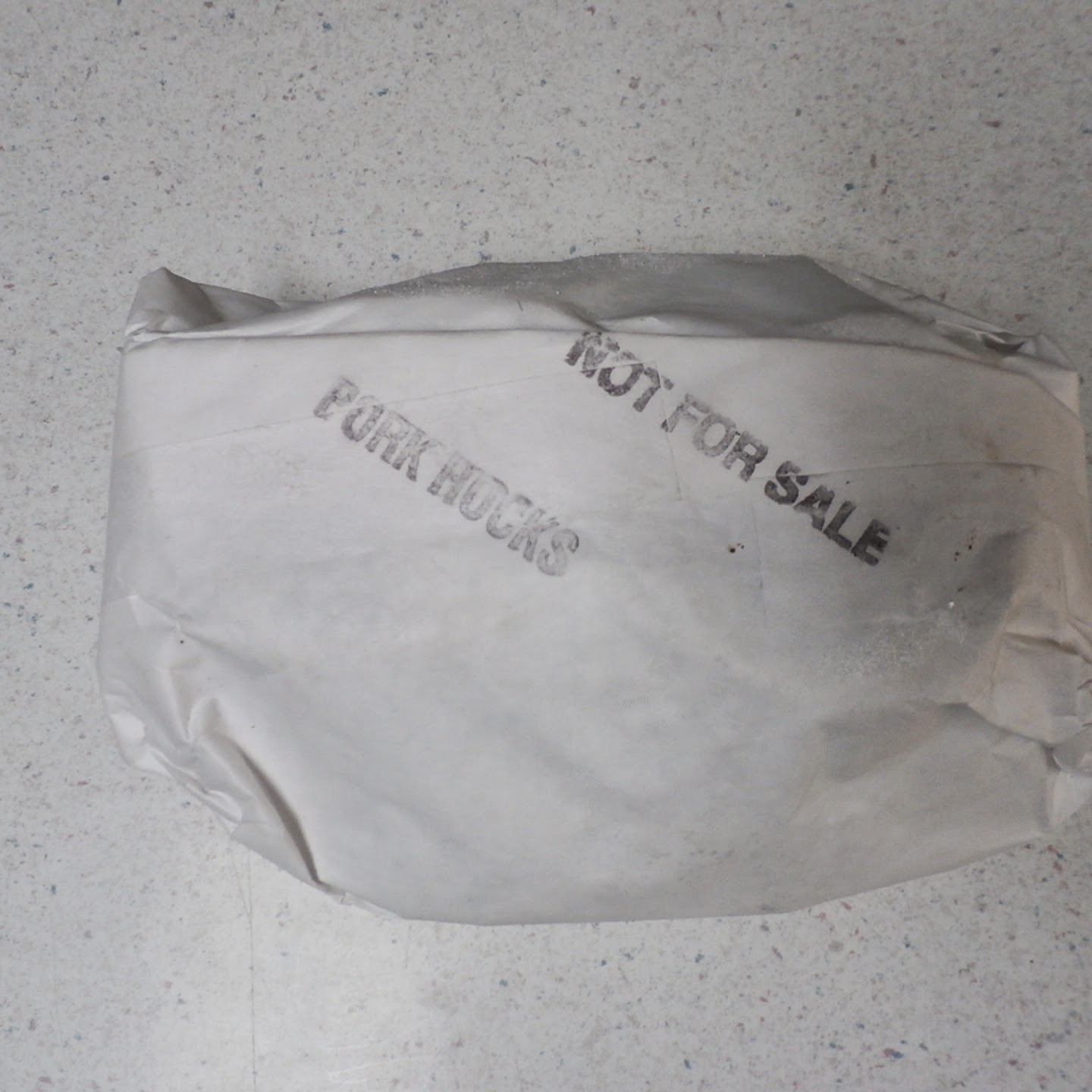 But there is light at the end of the proverbial pork tunnel and it's the headlamps of the Chevy truck that was pulling the stock trailer full of these beautiful beasties:
The scene above is usually the last of our involvement in what ends up as a grilled pork chop on our suppler plates.  The last two years we've been getting our hog from a farmer / friend just a few miles up the road and then had it taken to the local butcher, just a few more miles away.  But this year we wanted to experience more of what it actually takes to get select cuts of Porky Pig wrapped up in that nice, white butcher paper.  So when we found out that a couple other friends were ordering hogs and  having a butchering day, we said that we wanted in on it.

These hogs came from a small farm in West Plains, MO.  Not that we didn't like the last hogs we got, but this is where the other people were getting them and we figured we'd spread the pork-chop-wealth around a bit.  We met the husband and wife, I asked stupid questions like, "Ooo, do I get to pick MY pig?!", money exchanged hands and the five hogs were brought down to the farm where we were doing the butchering and thus began our first stint in hog butchering.

The farm we were doing the processing in is already set up for massive meat movement.  They process deer on the side for extra money and have all the equipment, including a walk-in cooler!  We showed up at 9 am on Friday morning and anxiously awaited the arrival of the hogs.  My heart almost skipped a beat when in the distance I heard the familiar sound of a large vehicle crunching gravel under it's tires and the tell-tale squeaking of a stock trailer being pulled behind.  There were a total of five hogs (one of them with our name on it) and four of us there to help.

The first phase of butchering, the skinning & gutting, wasn't rocket science.  The pigs' time on this earth was ended quickly and humanely by the skillful hand of Eagle Eye Aaron.  They were drug out of the trailer and underneath a very large tree then their throats were slit to allow the blood to drain.  If you've ever skinned and gutted anything before, it's pretty much the same thing, just bigger.  And, well, it helps to have some larger scale hanging equipment and a very sturdy tree limb to suspend said equipment from: 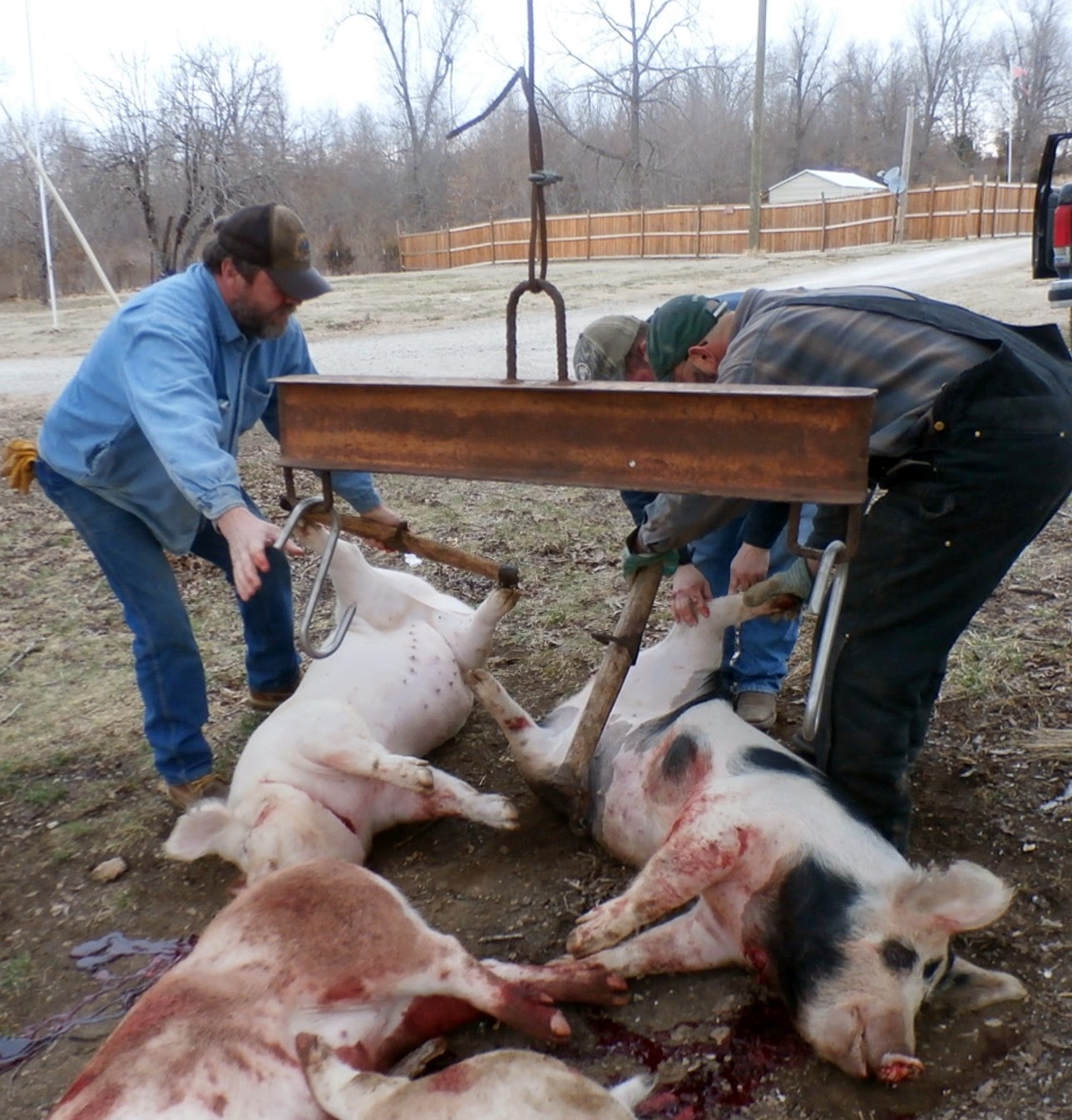 The largest animal we've processed has been a hundred plus pound deer and my chosen pig weighed in at 290 pounds.  If we were to do this at our place, we'd have to invest in some heavy duty pulleys, cable and find ourselves a nice tree because the rafters in the garage (where we usually process our deer) wouldn't last long with one of those piggies hanging from it.  Wonder if our homeowner's insurance would cover the collapse of the garage by "excessive pork chop weight"?

Their chosen way of removing the hair and hide from pigs is by skinning them.  I know that others scald them in boiling water, but honestly, where does one get a pot large enough to do this?  Initial cuts are made through the skin around the bum, around the back feet, down the legs and then down the belly. 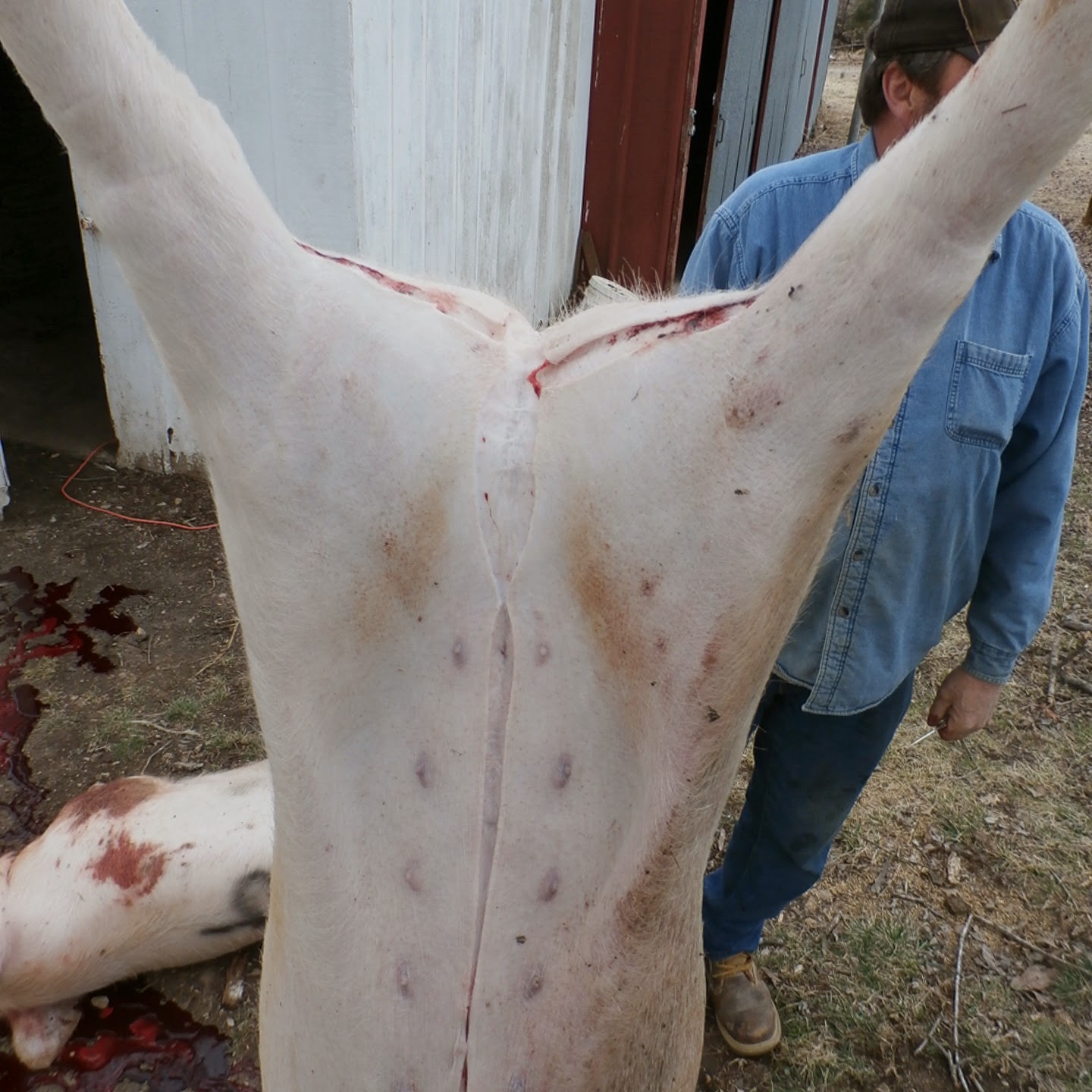 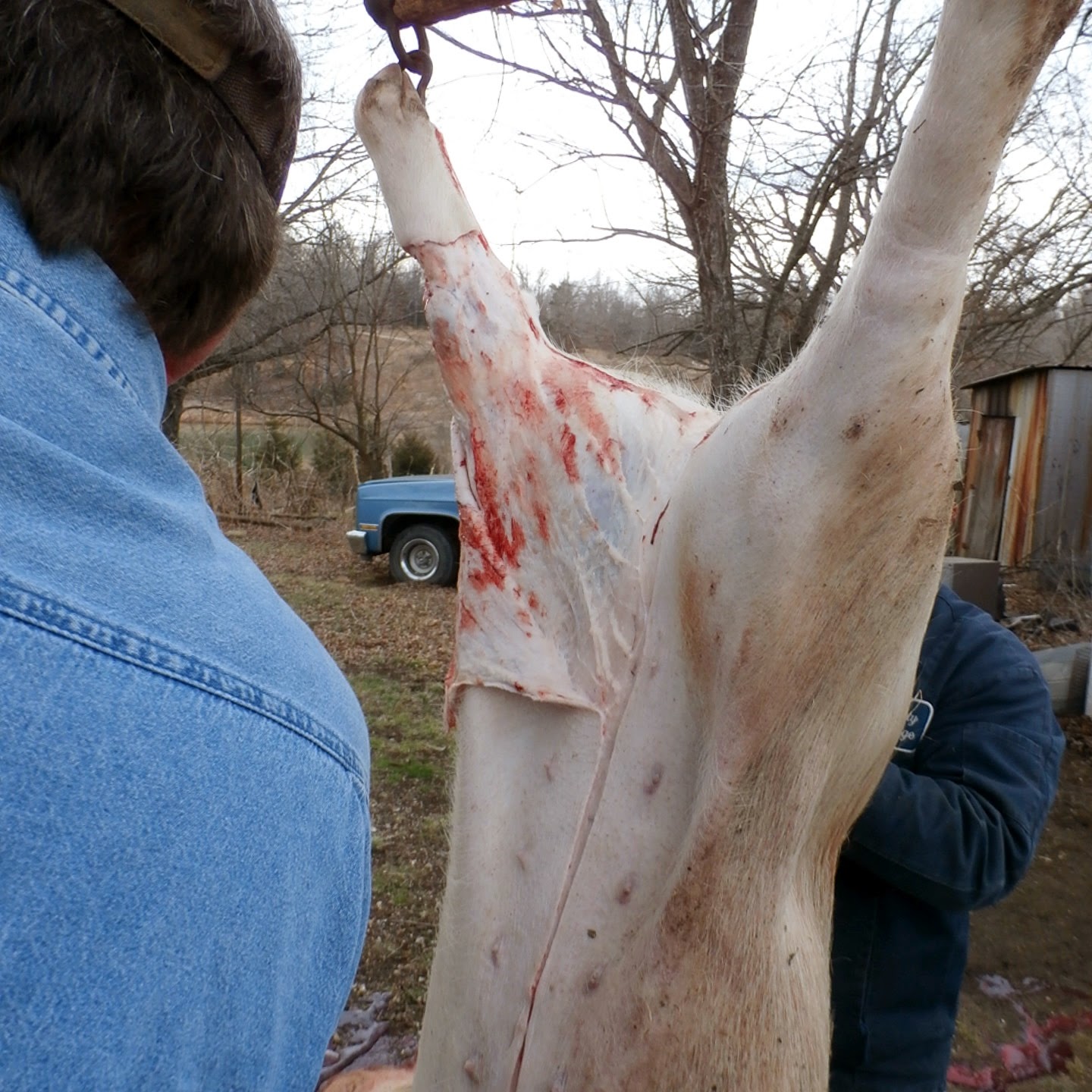 If you don't care about the lard (are you nuts?!?) you don't have to be as careful cutting the skin from the hide, but you'll lose a lot of that potential lard.  And you definitely have to be extra careful around the belly because you don't want to lose any of that delicious soon-to-be-bacon.

Once the skin is pulled off down to the neck, a cut is carefully made into the belly and the insides are pulled outside.  No pictures of this as I was there with a bag to catch the "keeping" inside parts (i.e. heart, kidney, liver).  Once everything is out the head and front feet are cut off, the carcass is given a good once-over with the hose and the saw is used to cut the carcass down the middle of the spine: More hose action and when things have had a few minutes to drip-dry, convince one of the three burly menfolk to heft a side of pork on his shoulder and get those babies hung up in the cooler for your daughter to admire: 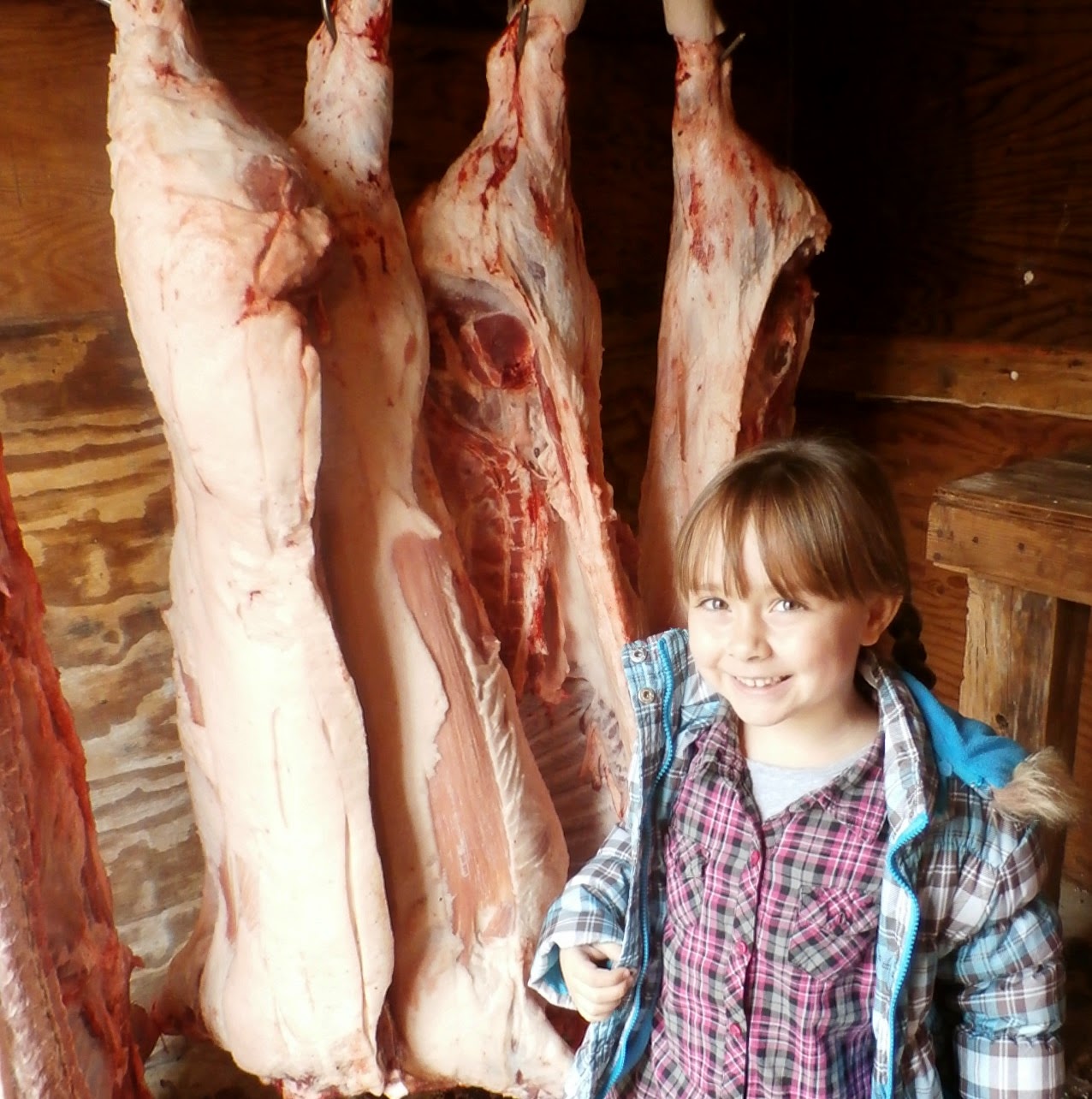 Tomorrow we'll get into cutting those slabs of meat into the more familiar chops, hams and slabs of B.A.C.O.N. ! ! !