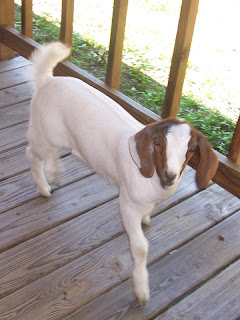 Since we've had her in with the rest of the herd, she basically stays in the pen with them most of the day.  But she long ago figured out that she can squeeze through the cattle panel enclosure so I'll occasionally find her outside the pen munching on the greenery.  Thank goodness she hasn't figured out that there are fruit trees and my front garden that she can get to.  She's starting to have a bit of trouble getting herself through the panels, so hopefully she'll soon be confined to the goat pen and I won't have to worry about her destroying my gardens.  As if there were much left to be destroyed after the chicken and armadillo onslaught.

Pickles is still sucking down the milk like crazy.  I weighed her in at twenty-seven pound this morning before her first feeding.

Her last feeding is between 11pm and Midnight and then only again in the morning, usually around 6 am.  At least I'm getting some uninterrupted sleep now.  During the day I'll feed her about 16 ounces every 3 - 4 hours and she sucks the bottle dry.  She's eating hay and grass, although I haven't seen her chewing her cud yet.  She gets her own little bowl of grain when the other goats are penned up for milking / feeding time and she's been snacking on it, but not attacking the food like the older goats do.

I want her to grow big and strong (and meaty!!), and I'm wondering if I should increase her milk feedings or just keep them as is and let her get hungry so she eats more hay/grass and grain.  She's got at least another two weeks of bottle feedings before I start weaning her.  But I'm considering continuing giving her bottles during the day a full month past the typical eight week weaning period.

What say you, oh keepers of goats?  Do I keep letting her drink until I'm sick of bottle feeding her or is there some detrimental side-effect of keeping a kid on milk past 12 weeks?  I kept Nettie's kids on her last year well past twelve weeks and they seemed to be bigger than the ones I weaned / sold at eight weeks.

Or it could just be that I didn't see those kids at twelve weeks 'cause I sold them.

Any suggestions from the goat gallery?
Posted by Carolyn at 6:57 AM