We've been getting our hay in large rounds for over a year now.  Although I like the ease of working with the smaller square bales, it's just too expensive that way.

The mule barn can hold eight round bales (more if we stacked them, but I'm a bit leery of having them 2-high), but with this year's drought and last year's still crisp in our minds, we stocked up.  Bought six bales earlier this spring and got another ten bales over a month ago, and there were still two in the barn.

Since we don't have enough barn area to store all the bales up at the barn, we had to do something to get the remaining bales under cover.  Granted, you don't have to have them covered up, but it most definitely decreases the likelihood of them getting mold or mildew.

Last year, we brought two round bales to the house for the goats.  In order to make it easier to get the hay off the roll, Paul tipped them on end so I'd just have to walk around the bale and peel off hay as I went.  We put tarps over the bales to protect them from the weather and figured the hay was safe that way.  The first roll was fine, but when I got to the second roll, I untarped it and found mildew/mold all around it.  Not that it was totally unexpected, but what I didn't expect was to find that the mildew went ALL the way through the bale.

Normally, if round bales are stored outdoors, they are on their sides.  I thought this was just because it was how it came off the bailer and made it easier to move (i.e. roll) them around.  But apparently they are also stored this way to help with shedding rainfall.  I know this now.

Since our bales were tipped on end, any water or moisture that happened to get under the tarps just drained down into the center of the bale.  Then add the fact that it was tarped, what moisture was in there wasn't able to evaporate because of the tarps on top.  Wonderful environment to promote mildew and mold.

So Paul ended up rolling the $65 bale of hay down the hill.  Pretty expensive mulch, hugh?

Anyways, back to this year's hay.

Since we had six bales that wouldn't fit in the barn, Paul made some cattle panel hoop houses for them: 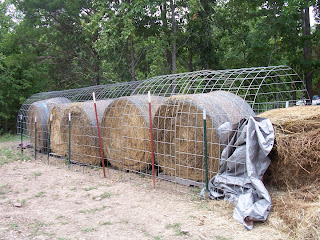 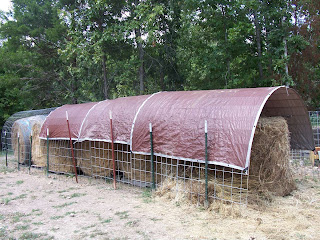 Although you can't see it, there is a wood pallet under each bale.  This will keep the bottoms relatively dry and as a bonus, the bales can be moved with the forks on the tractor.  We still need to get another tarp or two in order to cover the end bales.  Everything else we already had here on the homestead, so it really didn't cost us anything "extra". 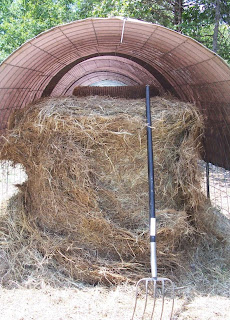 The end bale is tipped up on end so I can peel the hay away.  There's a tarp directly above, not on it, so there is still air circulation to keep mildew / mold at bay.  As I go through each bale, we'll just take a panel hoop and tarp off, remove the t-posts, tip the next bale on end, and open the new bale.  The materials would just go back into our homesteading inventory until we needed them again.

I was thinking that we would have a shed roof put on the ends of Paul's building (you know, the one in our dreams) to store our hay, but honestly, I think I would be more than happy with using this Hay Hoop House from now on.
Posted by Carolyn at 1:48 PM