A Bit O'Canning (and complaining)

My kitchen counter tops have been a disaster this past week, much to my Mom's dismay. (She's a neat freak.  Yes, you are Mom, just deal with it).

Anyways, with the last of the garden pickings piled up on one counter, pickling spices, large containers of sugar and salt, canning jars, lids, bands and boxes cluttering the other remaining counters and huge pots of boiling water or liquid fruit sugar on the stove, to say that my kitchen was a complete mess would be a gross understatement.  My socks would stick to the kitchen floor from various syrups dripped from stove to sink.  I'm afraid if one of the cats came through there they would be relieved of the skin on their paw pads.

And I didn't even do more than three half-days of canning.  Our garden was a flop this year so there were no red tomatoes to can.  No strawberries, raspberries or blueberries to make into jam.  What I did can was lots and lots of green tomatoes:
I got a recipe from Hoosier Girl over at Blessed Little Homestead Life for Chow Chow.  I kind'a followed it.  I didn't put in the green peppers as I already cut them into strips and froze them (saving them for Italian sausage sandwiches) nor did I use jalapeno peppers ('cause I'm a wimp and don't like spicy stuff).  I tasted the Chow Chow just as it was ready to be put into the jars and decided that I wanted it a little sweeter so I dumped another cup of sugar into the pot.

I also made a batch of pickled green tomatoes with onion.  Which then put my green tomato relish count in at six quarts and 11 pints.  I have no idea what I'm going to do with it all.  I mean, how many side dishes do we eat a week that would require the addition of a green tomato relish?  I'd love to have it with fish, but we don't eat fish much at all.  Yes, we have a 70,000 acre (give or take) lake just 3 miles away.  But apparently I don't give Paul enough time away from the homestead work for him to go out and catch a walleye or two. 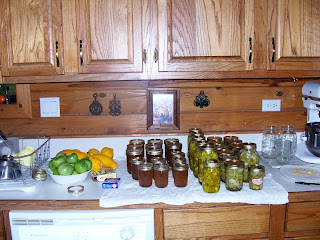 I admit, this shot of the counter top mess was after I had already started cleaning up.  And I didn't have time to take a picture of the stove top after the apple jelly boiled over the pot as I was too busy trying to wipe the burning liquid sugar off the heating elements without catching the towel aflame and fanning the smoke away from the eardrum splitting noise of fire alarm.  Paul came home from work that day and immediately asked why the house smelled like burned caramel apples.

The chickens have been enjoying the spoils of canning.  Apple mush left over from jelly making.  Cores and icky parts of tomatoes.  Seeds, peelings, parts and pieces.  If it weren't for the voracious appetites of the Cornish meat birds, I don't know what we'd do with all the leftovers from the garden.  But the Creepy Meats (who do I give credit to for coining that phrase???) are only going to be around (i.e., alive) for another three weeks.

Well, we could get a baby pig to raise for the freezer.  We are running out of bacon in the freezer.

Paul's Take
No, no, NO!  We are NOT raising a pig.  I mean it.
And if I wasn't busy making pasture, cutting timber, screwing with fence and putting up with your homesteading projects, I would be on the lake.  You know, the lake that brought us down here in the first place.  The lake that I've only been on a dozen times since we've moved here....seven years ago.
Posted by Carolyn at 4:05 PM