If I haven't totally alienated my vegetarian or kind'a-vegetarian followers this past week, I'd be surprised.  You'd have to admit, it was a pretty grueling raw-flank-steak-slap-in-your-face kind'a week.  And if you've made it through without thinking I'm a murderous, heartless, bambi-killing fiend, I'd be doubly-surprised.
But if you've stayed with me through this all, I'd like to say "Thanks!"  And I hope that you've found it either amusing, entertaining or even a little bit informative.

I think I've taken you through quite the meat gauntlet lately; squirrel, deer, chicken, goat and pork.  I guess I could have put in an honorable mention for "Fish", but according to a certain someone I know, fish don't think so they are not considered meat :)  Oh, and speaking of fish, I saw a billboard recently for Long John Silvers and it has a picture of one of their fish meals with the caption "Fish don't have feelings".  I'm not sure how I was supposed to take that bit of mega-sized advertisment, but  I'm a bit confused.  Was it a joke or do they really think that fish don't have feelings?  Admittedly, I'm the last person you'd think would be offended by an ad for fried fish, but it did seem kind of brash to assume that fish don't feel.  I mean, now do they know?  Do they speak "fish"?  And I'm not even one of those freaky save-the-sardines-tofu-eating kind'a gal.

Anyhow....where was I.  Oh yeah.  I have to admit that after all this meat-talk I'm craving some pasta and broccoli smothered in a garlic cream sauce alongside a salad bursting with onions, tomatoes, mushrooms and some parmesan bread sticks.  Not a lick of meat in that anywhere and totally guilt free.  Unless of course you think that tomatoes have feelings.

Paul and I have been talking about our somewhat backwards and maybe even slightly artery-clogging way of stocking our pantry.  As self-proclaimed wanna-be homesteaders, it would seem that growing vegetables as the main part of our diet and pantry would be healthier and cheaper.  Goodness knows that we don't need to include a slab of flesh at every meal.  But when I do occasionally make a vegetarian supper, Paul is always a little disappointed, even if he doesn't say anything.  He's a meat and potatoes kind'a guy.  Not that I blame him.

Raising meat is more expensive than growing vegetables and requires us to become less self-sufficient.  With the exception of the wild game, every chicken dinner, pork chop and goat tenderloin requires us to purchase grain and hay to feed those animals.  And as anyone without their head under a very large rock knows, the price of grain and hay has increased every single year, this year being the worst because of the far reaching drought here in the US.  In a perfect homestead, we would be able to free range our chickens, goats, pigs, rabbits, etc. on pasture and the bountiful wild fruits and nuts of the forest.  But alas, we don't have the fencing for that yet.  And honestly, we'd probably still need to provide them with supplemental grain and hay in the winter.

There is also a lot of expensive infrastructure involved with raising animals like housing and fencing.  Veterinarian care, medicine, supplements and overall daily care, feeding and watering of those animals.  Vacations are basically non-existent when livestock is involved.  And of course, there's the taking of a life.  Not a particularly fun thing to do.  Unless it's the pecker-headed rooster.  Then it's fun.

So maybe we need to shift our focus to the gardens this fall and winter.  Things like improving the garden soil, increasing the size of the gardens, fencing the new areas and making some sort of irrigation system to make watering less time consuming.  Because even though I hate weeding, I hate watering even more.

Even if we managed to get a kick-butt garden going, I don't know if I'd ever go vegetarian.  I like bacon way too much. 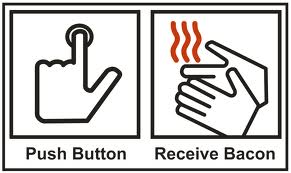 And I admit I'd rather spend time mucking out animal stalls than picking squash bugs off the zucchini plants.  I can sit and watch the chickens and goats all day.  And although I frequently gaze at the beauty of a squash blossom or the inhale the wonderful smell the fresh basil, it just isn't the same as working with the critters.

But I know that I have to up the ante on our fruit and vegetable production.  And I have to thank some of my blogging buddies for the gardening inspiration (Mama Pea, SciFiChick, Erin, Jane and Erica to name just a few).  I guess this realization comes at a perfect time in the year.  Most of the garden area we do have has already been put to bed for the season so I can focus on new garden areas, building up soil and putting up fence when it's not a million degrees outside.
Posted by Carolyn at 10:25 AM