Rhiannon loves apples.  I'd bet she eats at least one every day.  Since we go through so many apples, the chickens get a lot of apple cores.  And even though I feel giving the "waste" to our chickens isn't a waste at all, I still felt like I should somehow utilize those cores for something other than chicken snacks.

Then I read someplace that you can save the cores and skins in the freezer until you have enough to make jelly with them (now why didn't I think of that???).  So since before the beginning of Summer, I've been cutting up Rhiannon's apples for her so I could put the un-chewed and un-toddler-slobbered cores in a bag in the freezer.

This weekend I figured I had enough for making a decent batch of jelly: 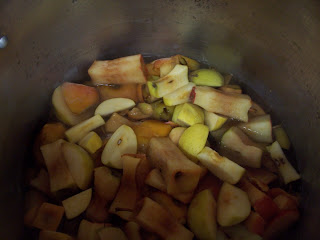 I cooked the apple cores down with some water and was thinking I'd just make apple jelly.  But the smell reminded me of apple cider, so I threw in some cinnamon, allspice, nutmeg and cloves to make it more "festive".  After everything cooked for a while, I strained and smooshed the apple "stew" through a fine sieve then strained it through several milk filters into jars:
It was getting late so I just put the jars into the fridge and would make jelly the following day.  The remaining apple pulp went to the very grateful chickens.  And you though I just screwed my biddies out of their apple snacks.  Now they had apple cider snacks.

The next day I took the apple cider'ish juice out of the fridge and started the jelly making process.

The end result:
Heavenly Autumn smelling apple cider jelly!  (No dinosaurs were harmed in the making of this jelly.)

I think we're up to over twenty-nine pints and twenty-two 1/2 pints of blackberry, grape, and apple cider jam/jelly in the pantry.  Guess we're set for PB&J's for at least a year now!
Posted by Carolyn at 7:03 AM