Another installation of Meat Week, brought to you today by the generous people at PETA (People Eating Tasty Animals).

As if it weren't hot enough outside, I figured I may as well try to get the temperature inside the house a cozy 80 plus degrees.  What better way to accomplish this than to start canning!

Got the water in the pressure canner and another pot of water going on the stove, then washed my jars, bands, lids and got out the funnel thingy and jar lifter. 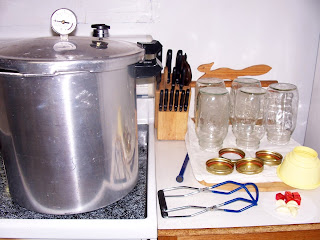 In each quart jar, I put a single beef bullion cube and a clove of garlic.  The last time I canned venison I only put in a clove of garlic, but a friend said this is how she did it so I figured I'd try it this way.  Since there's a bullion cube in the jar, it makes a stronger broth and you can make a gravy using that broth and corn starch or a roux.

Once the water started boiling, I added the chunks of venison to the quart jars and poured in boiling water (from the other pot, not the canner) to an inch of the top of the jars. 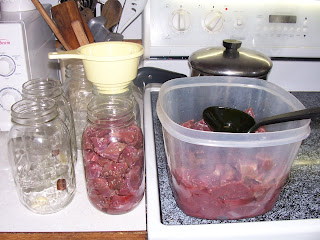 Once the jars were filled, I poked around in each jar using a chopstick to release any trapped air bubbles in the jar.  Wiped the jar rims, put the lids and bands on and tightened them up. 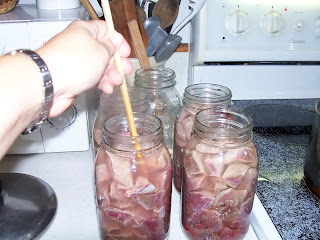 Into the pressure canner they went and I put the lid on and locked it on.
Once the lid is on, it takes a little while for the pressure to build up in the canner.  If I had to guess, I'd say it took about ten minutes or more to get to 11 pounds of pressure.  Once the canner hit 11 pounds, I set the timer for an hour and thirty minutes (pint jars would only need 1 hour and fifteen minutes).  During that time, I set another timer in five or ten minute increments so that I could check on the pressure.  It can quickly go from 11 pounds to 15 pounds or down to 5 pounds, so although you don't have to sit there staring at the canner, you want to make sure you check on it often to adjust the heat in order to keep it at the required pressure.

And since I was just milling about the kitchen anyhow, it seemed like a good time to make some cookies.  Multitasking, you know.

Once the hour and a half was up, I moved the canner off the burner and let it vent until all the pressure was out.  I actually don't know how long it took as I left the house for a while, but I'm assuming it's close to a half hour.  When I got home, the canner had cooled down and the pressure had vented.  I lifted the jars out and let them cool on the counter top:
I was pretty disappointed that all I got was four quarts of stew meat.  When Paul and I got our hunting licenses for this year, I was pretty determined to make an effort to can most of the meat.  The freezer is almost full now, and I'd like to get at least one more deer this year.  Oh, and we have twenty-four  Cornish creepy meats that will be butchered in the next week or so and I was hoping to have most of them in the freezer too.  Where am I gonn'a cram all this new meat?  Well, besides in my maw.
Posted by Carolyn at 6:19 AM