Hay.  We feed the goats hay.  Like 12 months out of the year.  Because we have no fenced pasture.

So, what does one do to cut down, if even a little bit, the hay bill when there is grass and green-goat-munchies all around but no way to keep the goats from 1) eating the garden and fruit trees 2) jumping on top of the car 3) eating all the chicken scratch and 4) wandering the countryside?

I've been putting them out on long leads to graze.  Where they will wind themselves around any stick, twig or rock sticking up more than 2" out of the ground.  In like thirty-four seconds.

Paul will occasionally make four cattle panels into a small enclosure and put them in there for the day.  We even tried putting up a small electric paddock, but Nettie just walked right through it.  Getting zapped is just something some goats will suffer through if it means being able to get to the "better" grass on the other side of the electric fence.

A few weeks ago, I started doing something irresponsible.  I've been letting them out, walking them to a particularly nice and yummy looking patch of greenery....and leaving them to roam "free".  Well, not for long.  And I do tie one of them up.  It seems that as long as one goat is semi-stationary, the others tend to hang around. 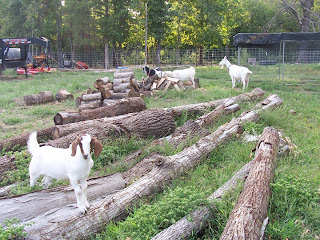 I've been setting a timer in the house for twenty minutes and will pop out there to make sure no one has wandered too far.  Or to make sure that no one has decided to bulldoze through the garden fence:
I haven't let the new Boer kids out though as I don't trust them to hang around.  Not to mention the fact that I have to keep the male Boer kid separated from everyone else as he is most interested in the females.


And speaking of the new Boer kids, my Mom named the female Lily (since she was born on Easter) and when I told my sister,  she said that I should name the male "Herman" then.  She waited for a reply from me, but I just said, "Uh hugh."  I didn't get it.  She eventually told me her reasoning.

Please tell me that I'm not the only one who didn't get why Christine picked "Herman".  Please.