First of all, I'd like to thank whichever blogger buddy of mine (OFG, possibly??) coined the term "Creepy Meats", as I now use it almost exclusively.

And the term is very fitting.  Those cute little white fuzzballs rapidly turn into eating, crapping, increasing-in-size-before-your-very-eyes vicious blobs of meat.  Well, maybe not exactly vicious, but definitely very food aggressive.  I hate going into the Creepy Meat's kennel.  Every morning they come at me like crazy-insane I'd-peck-your-eye-out-if-only-I-could-flap-my-feathered-mass-up-to-your-head avian monsters.  As if they haven't had food in weeks.  And they get fed mass quantities of commercial chicken feed, grain mixes, fresh vegetable scraps and even raw meat.  Two, sometimes three times a day.

And they really do grow that fast.  In just eight weeks, you can have a dressed-out chicken weighing in at four, even five pounds (a bit longer).  Oh, and a lot of smelly poop.  Which is why we put them outdoors as soon as they are feathered out and no longer require supplemental heating.  The live the rest of their existence in a large chain link dog kennel or our homemade chicken tractor.  When the area underneath their living quarters get too sloppy, the house is moved to a new spot.  This also gives them something fresh and green to eat (and crap on) and spreads the fresh fertilizer around a bit.

The first two years we got fifty chicks in the spring and butchered in early summer.  One of those first years the summer was dreadfully hot right around butchering time and we had one keel over from heat exhaustion.  And even though we butchered in the early morning, it was really still too warm to do so.

So the past three years we've raised the Creepy Meats in the fall for butchering the first week or so of November.  This timing not only makes for much cooler butchering weather, but it also provides a rare opportunity for us to get a bunch of free food for the chickens.  The volunteer fire department that Paul and I are members of have an annual Pork Roast the first week of every October.  And when it comes time to pulling all the fat and gristle off those pork butts to get ready for the hungry masses, we put the scraps in heavy duty garbage bags and take all that pork-goodness home for the meat birds (ok, some goes to the dog & cats).  They go through about fifty pounds of smoked pork scraps in a week.  And this year they also got the scraps from butchering the deer.  Got to love free chicken feed!

If you're really interested in our chicken processing efforts, click HERE for last year's batch as this year's Creepy Meats still have another week or so until it's "time".  Normally we just put the whole processed chicken in plastic wrap and stuff them into the freezer but since freezer space is at a premium this year I may end up quartering them, canning the breast meat and then freezing the legs, thighs and wings. 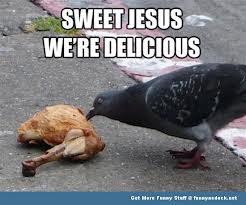 Oh, and does anybody have a totally foolproof recipe for fried chicken?  I tried making it last year and it was, well, edible, but not fried chicken'y like at all.  It just drives me completely bonkers that I can't make fried chicken.
Posted by Carolyn at 6:26 AM