Another week of No Spend October ended up being a bomb.  Granted, not as horribly expensive as last week's expenditures, but technically worse as it wasn't really mandatory stuff like vehicle repairs.

Went to the store to get Rhiannon some jeans and socks.  I've been scrounging the thrift stores lately, but just can't find any jeans in her size.  So I broke down and got her several pairs of new jeans, although still on clearance so I didn't feel that badly.  And since I was at the store anyways, I bought some other already-forgotten things.  All I remember is that I spent fifty-eight bucks there.  For "just" jeans and sock.  Ugh.  Then since we were out, I went to the grocery store where I bought apples, potatoes, grapes and some other also-forgotten stuff.  Twenty more bucks.  Double-ugh.

If you've read my last two posts, you know that Paul got a deer this weekend.  So we spent most of Saturday and almost all day Sunday processing the deer.  Processing sounds much nicer than killing, gutting, skinning, butchering, cutting and grinding, doesn't it?  But that's exactly what we did.

Ok, here's the meat picture.  And actually, it's pretty PG-13'ish as this was at the beginning.
If anyone were to have come over for a visit on Saturday, they would have run back to their vehicle and slung gravel the entire way out of our driveway.  Both Paul & I were either covered in blood or handling large pieces of flesh.  There were pools of blood on the counter tops, blood splatters on the floor, walls, refrigerator.  I had tiny bits of dried up meat on my shirt, in my fingernails, and in my hair.  Sinew and slimy bits of connective tissue littering the garbage can (and within five feet of the garbage can).  The entire house smelled like raw and bloody flesh the entire weekend.  At first it's kind'a yummy smelling (well, at least to me because it means food!) but it gets old after a while.  And no, incense will not cover that smell up.  What you get is a Raw-Meat-Patchouli smell.

I don't remember it taking this long.  But we did more than just quarter the deer and stuff it in the freezer.  We cooked some of it, sliced some of it into steaks, chopped some into stew meat, ground up a bunch of it for sausages.  I even weighed the meat this time just so I could brag had an idea about how much we got from one deer.

There was just under (by like ounces) fifty pounds of meat; the only bones in that calculation were in the ribs.  There was also close to twenty pounds of scraps that was ground up and fed to the Creepy Meats.  Which they devoured in two days, I kid you not.

Some of that meat has already been consumed or "experimented" with.  Last night we had more tenderloin medallions sauteed with red onions and garlic and a side of fried eggplant: 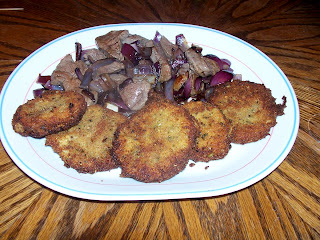 We also made a pretty darned good breakfast sausage out of some of the ground meat (I'll post the recipe sometime during Meat Week).  We've never made sausage.  Don't ask me why.  But we figured we may as well start as there are plans of having even more ground venison once I get my deer.

The kitchen is finally back to "normal".  Actually, it's cleaner than normal.  The counter, sink and backsplash get a good scrubbing and wipe-down with bleach after butchering.  And I'm totally sick of washing pans, tubs, cutting boards and knives.  But I'll be doing it several more times as I still need to make Italian sausage and have to can up the stew pieces in the pressure canner.

Stay tuned for "More Meat" tomorrow.
Posted by Carolyn at 11:02 AM