Kidding has officially started (well, technically it "unofficially" started three days ago...but more on that later).  And although it's officially Spring now and we've had some downright gorgeous weather the past two days (mid to upper 70's) it's not here to stay.  We'll be down to the thirties at night in a few days.  That, along with the seemingly constant on & off rain, is making it downright sloppy everywhere.

We (ok, Paul) built another goat hut about a month ago, but we really needed more sheltered areas for the goats and the impending influx of goat kids.  Last year I made a hillbilly hoop house with a tarp on top up against the side of the goat barn to provide another little area for the goats to hang out during inclement weather.  It didn't last long.  The goat kids jumped on top of it, tearing the tarp to shreds in no time at all.  But I still liked the idea of a lean-to up against the barn.

So what did my wonderful husband do for me? 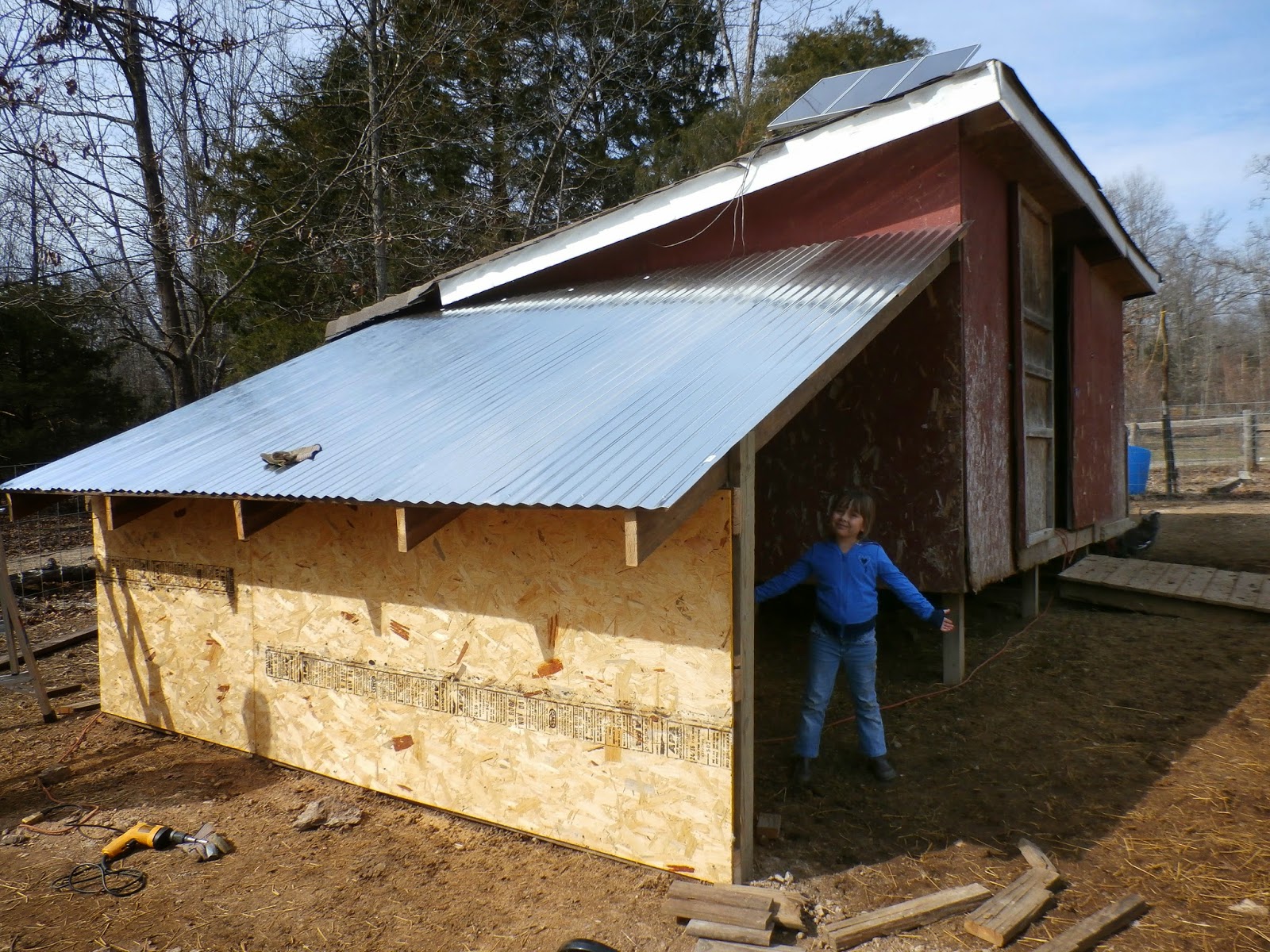 And it was just in time.  It rained the very evening that it was finished and there were goats underneath, nice & dry.  Then, just today, I had another goat using it. 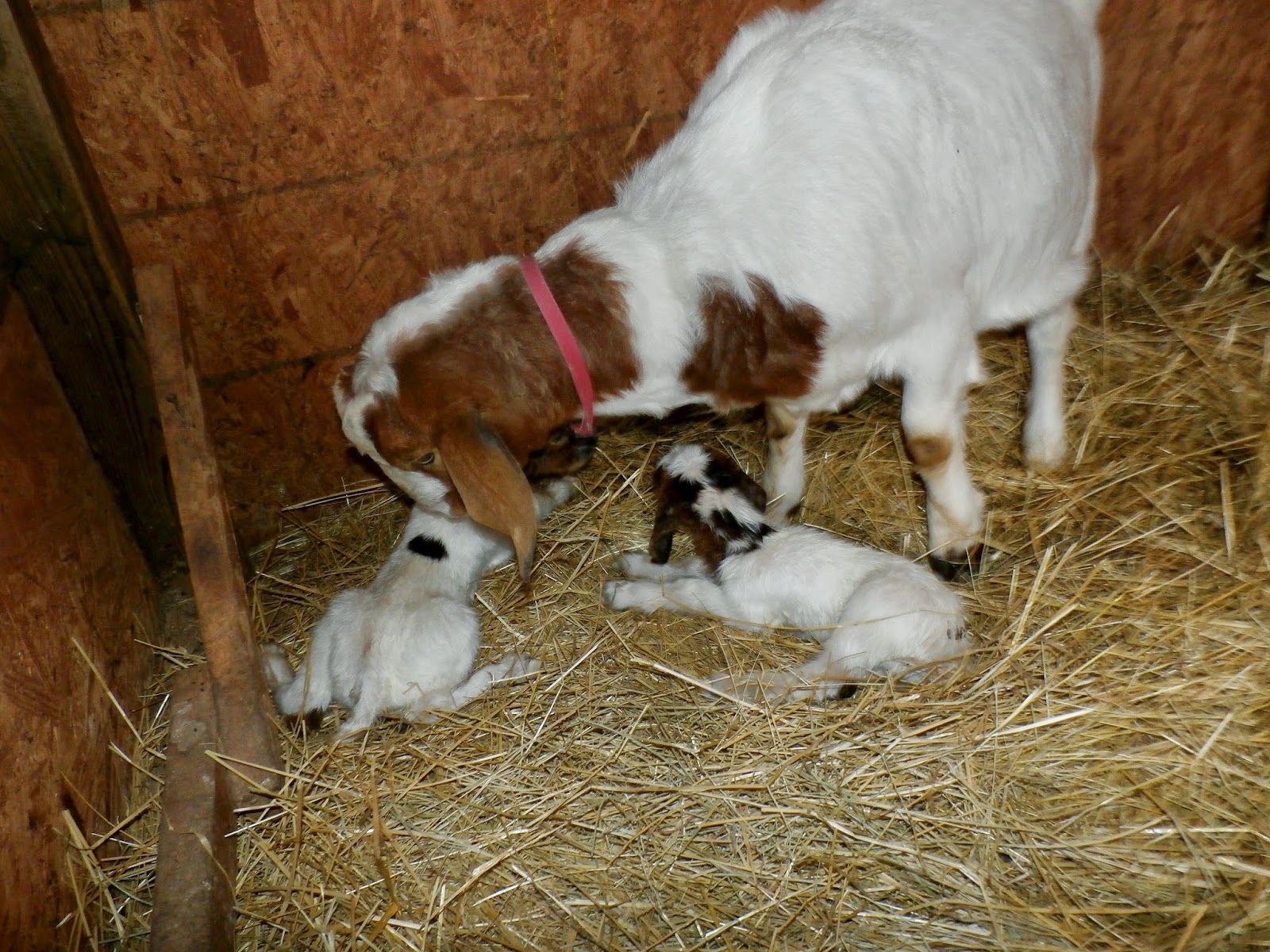 I was about to go pick Rhiannon up from Grandma's house and decided to check on the goats before I left and that's when I noticed that Dilly had hunkered down in the new lean-to.  In labor.  With a bubble already showing.

Dilly wasn't due for another three days, but I figured she was going to pop any time.  Her ligaments have been gone for several days and Pickles, her mother, kidded six days early with her last year.

The birth went very smoothly.  All I did was hold them upside down when they came out to clear their lungs, and wiped some of the goo off.  Dilly got into the mothering thing pretty quickly, softly calling to her kids when they made noise and cleaning them up.  Once it was obvious she was finished, Paul and I picked up her two bucklings and we put them in the kidding pen.

Unfortunately, it looks like both of them have weak back legs.  The smaller of the two was doing better about five hours after birth, but the first one born is still having problems and I'm having to hold it up to nurse.  At least they're both getting milk, but it's really disappointing.  We had this same problem with Dilly's brother last year and attributed it to a selenium deficiency.  So with that in mind, I'd been giving the pregnant does selenium in their grain rations, but it obviously wasn't enough or wasn't really what the problem was.  It could also be hereditary, but from which side?  The mother's side (Pickles and now Dilly) or from the sire's side (Herman)?  Herman's other kids out of Lily didn't have those problems so I'm wondering if it's the dam's side.  I guess we'll find out when the other does kid because Herman is also the sire of Lira's future kids.  Studly Do Right is the sire of Lily and Clover's future kids so if they don't have the same problems, then I'll have to decide the fate of Herman, Pickles and Dilly.  I won't have to worry about Dilly's kids passing on any potential "gimpy" genes as they, cute as they are, are destined for freezer camp later this year.

I gave both bucklings some Vitamin E, Selenium and NutriDrench and hopefully that will pep them up a bit.  I was considering going to the vet to get a shot of Bo-Se like I did last year for Gimpy, but it didn't seem to do anything.  I'll just keep up my hillbilly non-prescription concoction of a crushed up Selenium tablet and Vitamin E capsule (both readily available from Walmart...withOUT a prescription and without breaking the bank) like I did last year with Gimpy.  And hope that it helps.  I do NOT want to go through two weeks of slings, hobbles and constantly having to hold him up to his mother in order to eat.

Time to get off the computer.  It finally stopped storming so I may as well go check on the little guys & their momma.