Raindrops are falling on Herman's head
And just like the goat who's horns
Are too big for his hut
Nothing seems to fit
Those raindrops
Are falling on his head
They keep falling.

(I dare you to NOT sing that)

For months, Herman hasn't had any shelter other than under the cedar trees,  It's not because we lack a goat hut, or because I'm a heartless witch (well, it's not the main reason), but because the stupid bugger doesn't use the hut.  It would be pouring rain in the summer and he'd just stand on top of it.  He also had an annoying habit of bashing it around his pen and flipping it over.  So eventually I would take it back out of his pen so he didn't totally destroy it.

But with the coming of winter, I felt badly and put the hut back in his pen.  Which he didn't seem to use.  And constantly flipped over.  But it made me feel a little better knowing that at least I had provided him with a shelter.  If he was too stupid to use it, well then, that was his fault.

Another annoying thing about Herman is that he has horns and because we have cattle panel fencing, we have to rig his noggin up with some rather interesting headgear to prevent him from shoving his head through the panels and subsequently getting stuck.  Attaching the pvc pipe to his horns makes the overall size of his noggin too large to fit through the panels.

Apparently he managed to get himself into the hut with his headgear, but was unable to get back out of the hut.  Of course, this was when I was sick, so I was not in the mood to wrestle with a stupid goat stuck in a plastic dog hut.  But I went in his pen and tried to "coax" him out.  Which means that I shook the hut, tilted the hut over, yelled at him, and banged on the hut with my boot.  I finally gave up and slogged myself back into the house and told Paul that he had to get Herman out.

I left the goat-extrication to my husband, flopped back in bed and dozed off in a NyQuill induced sleep.  When I awoke (some hours later), I went back outside to find this: 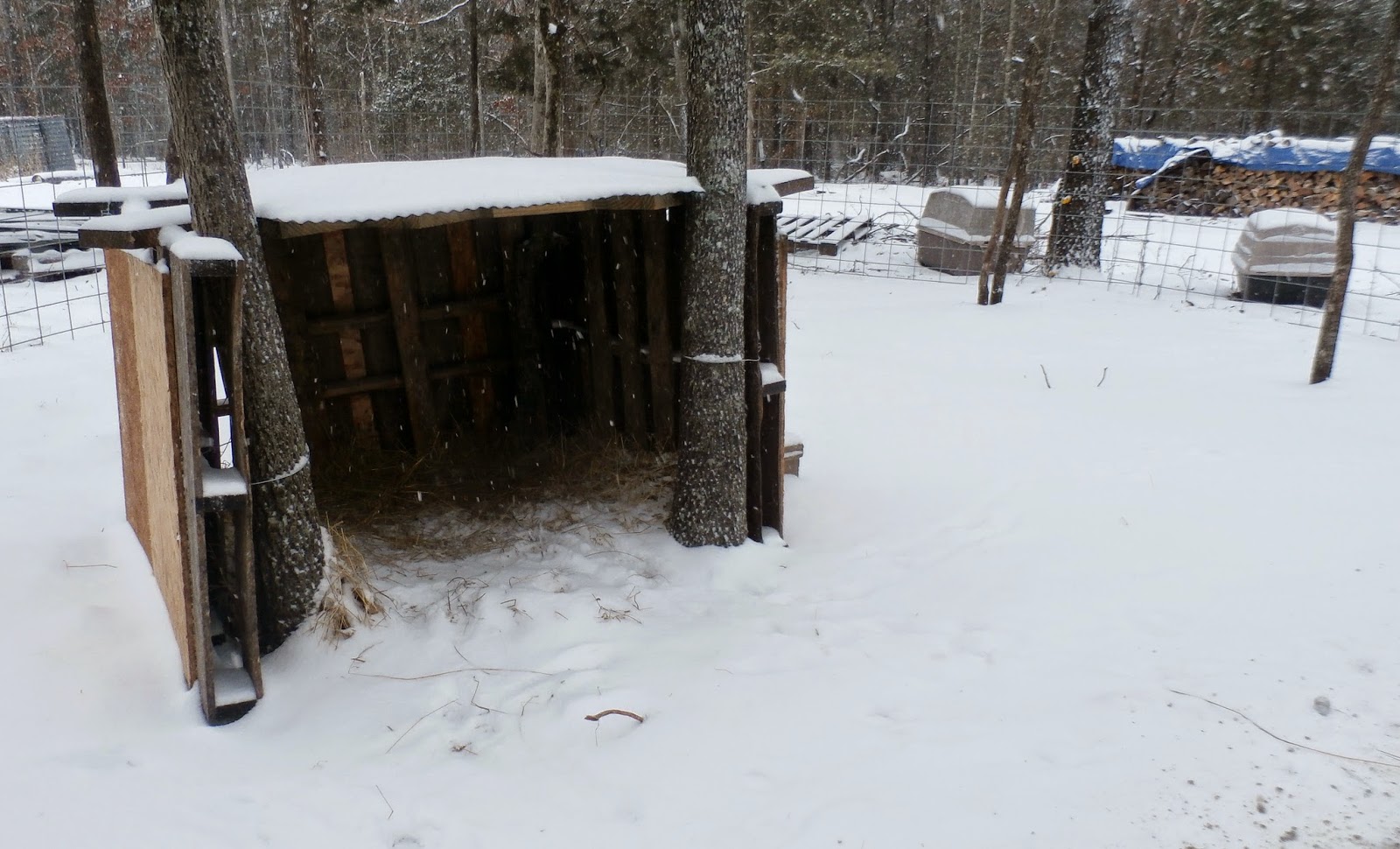 My wonderful husband had rigged a shelter up using some pallets, scrap plywood and some pieces of metal roofing.  He finished up Herman's new pad with a bunch of wasted hay and called it "Good".  Which it is.  And is much roomier than the plastic dog hut.

Herman's new shelter has been up for a week now and he hasn't managed to bust it up.  And if he does, well, then he can just sit on top of it and get rained on while he looks at all the other goats inside their nice, dry goat huts.
Posted by Carolyn at 8:42 PM