Not sure if it's just a regional thing, or if this entire storm system is named "Thor", but here's what I envision when our local stations keep calling it by it's official name: 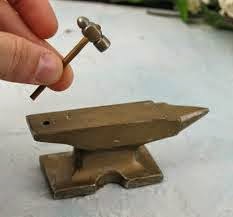 Our area got anywhere from 4" - 6" of the white stuff, so even though it's pretty significant for around here, I wouldn't compare it to the massive hammer wielding Norse god. A certain Northern Tundra friend of mine also questioned the reasoning behind naming storm systems.  I mean, do we really have to give every meteorological event a name?  Will we soon be bestowing monikers upon each lightning strike or early morning fog advisory?  Is the news that desperate to make every stinking mundane thing into a big deal?  Yes, it's snowing.  It's winter.  Go figure.  But I guess it's more interesting than having the local news guru saying "We're going to get some snow".

Apparently Thor wielded a much larger snow-hammer elsewhere in the country.  I just saw a blurb about an interstate in Kentucky where people were stranded in their vehicles for close to fourteen hours because something like two feet of snow came down.  I can only hope (but assume most didn't) that people had the foresight to already have blankets, extra coats and maybe even some water / snacks in the trunk of their vehicles.

At least around here, Thor will be nothing but a distant memory come tomorrow afternoon or Saturday the latest because the temps are going to be in the 50's.  And "supposed" to be up to 65 by Wednesday.  Go ahead, say nasty things about me.  You Northerners will get some satisfaction when it's a hundred and thirteen degrees here in the summer and I'm bitching about how I want to die it's so freaking hot.
Posted by Carolyn at 8:21 PM