Do my hindquarters look big to you?

Nettie’s bout with Mastitis seems to have cleared up (thank goodness!) after a few treatments of “Today” and some antibiotics.  I did another CMT test this morning and it came back negative.  But she’s still holding on to milk in her udder.  I wonder if she’s one of those goats that can keep milking without being bred.  Not that I’m going to find out.  After her kidding this spring, she was looking pretty skinny.


After treating her for mastitis, I started drying her up (except to milk her out for her med treatments).  I only milked her for four months, but I figure I would rather have her put energy into flesh instead of milk in my bucket.
Nettie’s been getting grain twice a day just like the other two milking does, but I’m not milking her.  I’ve also been top dressing her grain with BOSS (black oil sunflower seeds) and rice bran, although she really doesn’t care for the rice bran and I have to mix it in real well.   She’s also getting alfalfa pellets during the middle of the day.
She’s starting to look better, but not putting on as much weight as I thought she would given the fact that I’ve been letting her eat just about as much as she wants.  Not sure if it’s because of the extreme temps we’ve been having this summer or what. 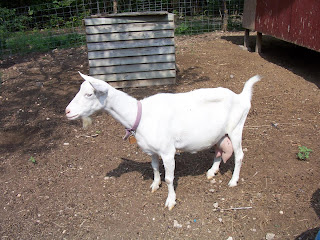 Do female goats worry about their weight?  Do they look in the mirror and think things like, “Oh, would you just LOOK at that muffin top I’ve got!” or “I really need to go on the elliptical trainer more often.”   “When Pan is breeding me, is he thinking about that spotted, long eared Nubian?”
Don’t they realize that the does in the magazines are airbrushed???  I’ve tried explaining to Nettie that no goat worth her weight in milk and with five kiddings under her belt (udder??) should look like a yearling doeling with that tight little udder, perky teats and skipping around like a ditzy caprine.   I wouldn’t trade you for a half-dozen doelings my devoted Nettie!  Now go stuff your head in the feed bucket and eat some more.
I still haven’t decided if I’m going to breed her this fall.  I guess it all depends on how much more weight she puts on before then.  I also wondered if it would be detrimental to her milk production if I skipped a year of milking.  Any goat people out there have any ideas?
Posted by Carolyn at 11:29 AM