As late as I already was, I still planted some seeds for a fall garden last week.  Peas, cabbage, green onions and spinach.  I put these in the newly vacated section in my raised bed.  I pulled the half-dead or eaten tomato plants and put the cabbages and onions in their place.  The peas went in the same spot they were this spring.  I’ve never done a fall garden.  I tried to use veggies with a harvest date no more than 65 days and I’m hoping that I’ll be able to harvest something, especially since I put them in the raised beds and they still have the hoops on them.  If the weather turns cool too soon, I’ll put the plastic over the hoops.  I’m also going to try and grow some lettuce under the hoops this fall. 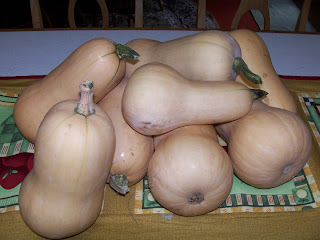 Butternut harvest so far!
Hopefully the fall garden will provide us with some fresh veggies.  This year’s summer garden was pretty much a flop.  Although I was pretty happy with the summer squash until the SBI (Squash Bug Invasion) last week, and my Butternut have been doing great…..that is if I can keep the SBI from hopping from the zukes to the Butternuts.
Two cups of sweet peas.  Twenty small onions.  Less than a dozen Rutgers and Roma tomatoes.  Two or three cups worth of pear tomatoes.  Six (maybe) micro-sized green peppers.  Several dozen cucumbers, many too bitter to eat.  Zero blueberries.  Zero raspberries.  And out of eighteen fruit trees, not a single fruit (although we were going to pick off the immature fruit anyhow to promote root growth, they are only three or four years old).
I still have to harvest the turnips though and may get a couple dozen of those.  Whip-tee-do.  Oh, and our potato-in-a-tire experiment has yet to be unveiled, but as we only planted a half dozen seed taters, I don’t see it yielding more than a dinner’s worth.  There are also six bush bean plants left (from a dozen) that I planted the first week of July.  Something is eating them to the stems before I can even get a stinking bean from it.  Oh, and four eggplants, only one of which has flowers on it.
So, was it worth all the time, labor and water for this “bounty”?  Absolutely not.  If I knew how poorly the garden would produce, I wouldn’t even have bothered raking out the beds this spring.  But then again, if anybody knew the production yields of their crops and garden……
I’d like to say something upbeat like, “At least it was a learning experience”, but I don’t think I could say that without rolling my eyeballs or swearing afterward.  I probably harvested more wild food than I did in my garden.
But there’s always next year, right?  And before we know it, we’ll all be complaining about how cold it is, how we hate chopping ice out of the livestock water buckets and how much firewood we still have to split.  Then we’ll start getting the seed catalogs in the mail.
And we’ll all do it again next year!
Posted by Carolyn at 6:17 AM