After sharing how incredilbly hot it was yesterday with some of my Facebook friends, I was challenged by one to fry an egg on the hood of my car.

Well, I figured, why not?  Before you all gasp at the apparent disregard I have for the exterior finish of my vehicle, I told him that I would be up for the challenge, although I'd attempt it on a metal object other than my Hyundai.

The smoker seemed just as good a place as any.  And it would be high enough up that the dogs or chickens wouldn't feel compelled to lick the egg off the surface.

So camera in hand, I went out to the chicken coop to procure an egg.  It had a small crack in it so I didn't feel too badly wasting an egg as it would have just gone to the dogs for dinner. 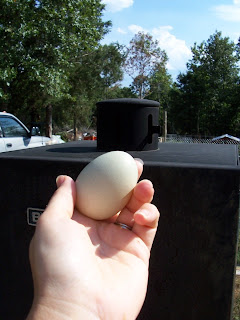 OMG, even my HAND looks fat!
How does your hand gain ten pounds in a picture?
Clambered up a makeshift stepstool and cracked the egg on top of the smoker: 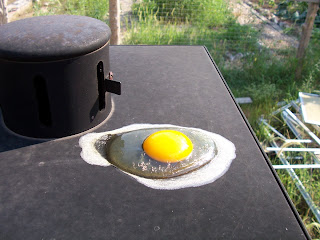 Not much happened.  The outer parts of the egg white started to cook a little bit, but definately no frying occured.  I went back in the house for a while & came back out to check on it about fifteen minutes later and nothing much more happened. 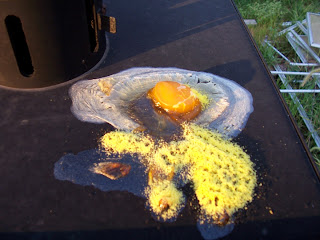 Everything basically just dried out.  Not hot enough to fry egg, but the humidity was only 20% yesterday so it just slow cooked and dehydrated.  Teeny tiny little black ants managed to dig a tunnel into the yolk & were bringing out little pieces to take back to their pantry.  Isn't it amazing how they find food like that?

Kind'a neat, so I stood there for a few minutes watching all the little guys.

I have no life.

Paul's Take
Actually, he hasn't commented on this yet, but if he did it would go something like this:
"You're darned lucky you didn't do that on the hood of the car!  Now I suppose I'm going to have to be the one to clean off the smoker.  Shouldn't you be watering and weeding the garden instead of doing stupid stuff like that?"
Posted by Carolyn at 9:33 AM