Things die all the time around here, usually to fill our freezer and stomachs.  Death, ironically, is just a fact of life.  But it's a big ol' bummer when it's not a planned or natural death.

About a week and a half ago, I went into the chick pen to feed & water the creepy meats (Cornish crosses) and homegrown chicks and found one of the homegrown hens in a corner smooshed flatter than a pancake.  I knew it was past time to get the Cornish meat birds in their own pen but as usual, I delayed it because I'm just plain lazy.  The Cornish chickens were at least four times larger than the homegrown hens and they all cram themselves into a corner of the pen at night.  I'm assuming the pancake chicken was just smothered to death overnight and then just got flattened from the sheer weight of her larger and heavier coop-mates.  I got the Cornish into the outdoor kennel just a few days ago.

Then this morning I went to water & feed the Cornish and found one of them floating in a bucket half-filled with water.  I bring water to the birds in 5-gallon buckets and fill their waterers from that.  Problem is, I didn't remember to bring the bucket back out with me after filling up their water.  What would tempt a fat, chunky, can't-even-fly chicken to flap it's plump mass up and into a bucket, I'll never know.  But the end result was chicken that drowned from my carelessness.  That cost two bucks plus the cost of feed it ate.  That I spent the last five weeks caring for.  That will now not be filling up our freezer or stomachs.  What a waste.

And last, but not least, I'm waiting on the death of another potential farm animal.  I say "potential" because I'm still not sure if something is actually going to die or not.  Lily, the Boer doeling that I bought last month, hasn't gone into heat since we got her (or at least not that I could tell).  I assumed then that she was pregnant as her previous owner let the bucks run with her since birth (big no-no).  Being so young, I didn't want her to give birth yet so I went to my local vet and got this: 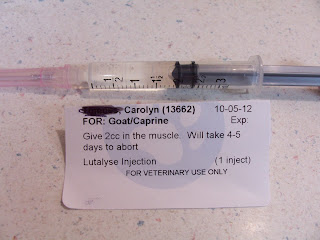 I actually got this over a week ago, but was still waiting and hoping that she would go into heat.  There are two very active and very smelly bucks at our place (separated from the does), so if that didn't get her into estrus in the past month, nothing would.

As I didn't notice any signs of heat from her, that probably means that she is pregnant.  And I'm not even sure how far along she is.  I did some online research on Lutalyse (Lute, for short) and decided that I would rather have her abort the possible fetus than have a kidding at such a young age.  Yes, plenty of goats give birth at an early age, but I didn't want to risk her life to find out.  So in order to save her from a potentially deadly labor and birth, I had to kill her unborn kid(s).

If she's not pregnant, the Lute will just cause her to go into heat.  If she's not far along in her pregnancy, her body will just reabsorb the fetus.  If she's further along, she'll go into labor and have a premature birth.  I'll have to "dispose" of the fetus and give Lily normal post-natal care.  We gave her the shot Sunday morning, so theoretically she'll abort today or tomorrow.  I've been keeping a sharp eye on her.  Hopefully I'll be able to tell if something is amiss and be there to help if she needs any.

Unicorns and ice cream cones, farm life is always not.


Wow, that sounded quite Yoda'ish, didn't it?
Posted by Carolyn at 7:26 AM