When my sister and I lived at Dad's house back in the 'burbs, we had a pet squirrel.  It didn't live in the house with us (well, except for that one time when it snuck in when Christine was leaving for school and Dad found it sitting on the living room couch), but it would visit us and even come when called.  We fed it all kinds of goodies, including Frango Mints (understandably, Dad was horrified when he found out we were raiding his stash of gourmet chocolate mints to give it to the squirrel).

One day we found her dead by the side of the street.  We were obviously upset.  She had a full funeral and I buried her in the backyard in a Frango Mint box.  Then the next day we found an orphaned squirrel baby and figured it was her offspring.  Christine named him Mr. Bigglesworth.  So we nursed and cared for it, then eventually set it free to roam the backyards of our neighborhood.
Fast forward almost fifteen years.

Although I still have fond memories of our pet squirrels, my attitude towards their kind in general has been severely tarnished since moving to the country.

They eat the logs of our home.  They chew through plastic buckets and eat the livestock grain.  They chew wires and gnaw on the barn door.  There are probably another half-dozen annoying little habits they have that I just can't recall at this time.  But at this particular moment the thing that is driving me nuts is the massive defoliating of the oak trees.

Every morning it looks like some giant came through and shook the occasional oak tree until half it's green leaves fell to the ground.  Instead of taking a few acorns off the branches and bringing them down, the squirrels are chewing off the branches of the oak trees so the bundle of leaves and attached acorns fall down.  After they've dropped about a half dozen branches, they go to the ground and harvest their prize.  Lazy or inventive?  Either way, it's pissing me off.  Technically I'm not sure if it's really harming the trees, and I am taking advantage of the fallen greenery to gather and give to the goats as treats.  Regardless.

For whatever reason I didn't do much, if any, hunting earlier this year and I remember there being a plethora of squirrels this spring.  Probably due to the fact that we had a very mild winter last year. I don't even think they went in to hibernation as I don't recall there being any winter month without them running around the yard.  Mild winter + lots of food (chicken food being their favorite) = unchecked and intolerable number of tree rats.

So after Paul heard me cussing under my breath "stupid #$^%* squirrels" for the umpteenth time, he finally just shoved the rifle in my hands and told me to do something about it.

It didn't take very long to get four of them skinned, gutted and soaking in salted ice water.  I usually just plop them all in the pressure cooker with some seasoning then pull the cooked meat and serve it over dumplings and gravy, but Paul asked for something different.

So I quartered the four squirrels, dipped them in homemade baking mix (like bisquick) seasoned with salt, pepper, garlic powder, and fried them up until just golden brown.  Put the pieces in a 270 degree oven for about an hour and a half and served it with my favorite canned green bean recipe and homemade onion parmesan biscuits. 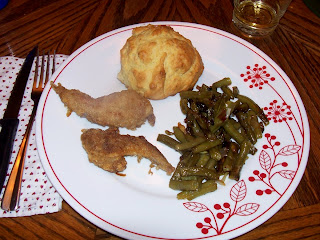 Don't let the picture fool you.  I ate more than was on my plate.  Actually, I ate an entire squirrel.  And it was G.O.O.D.!  Don't believe me?  Ask Rhiannon:
Christine & Mom: Please take note that I did not post the actual skinning, gutting & cutting up of the squirrel carcasses.  You're welcome.
Posted by Carolyn at 8:56 AM