Ok, I'm guilty.  I make things and just go with the flow.  Some say that it's a good thing, others will say that's no way to cook.  And I have to admit, I used to be one of those people who would curse at someone who would admit to not using a recipe, not knowing the recipe or just gave directions like "a pinch of this", "season to taste", "a dash of that", and "some of the other thing".

And guess what I do now.

Anyhow, here's what I think I did to make the Apple Cider'ish Jelly:

I had two gallon-sized zippy bags plus a small zippy bag of frozen apple cores, skins, pieces, parts, etc. and dumped them into a large pot.  To this I added approximately 14 cups of water.  And I only know this because everywhere else I read about making apple juice is that you really don't get much juice out of the actual apples, just the "goodness" that gets cooked into the water you put in the pot.  And I ended up with just under 14 cups of juice.

You don't want to drown your apples in water though because then it will taste like, well, watered-down apple juice.  I figure it's better to be more apple-y at the beginning and then add water as needed.  Honestly, I think my juice could have been more concentrated, but I didn't have any more apples to put in the pot.  I guess I could have just boiled down the juice a bit, but I'm lazy.

I let my apples and water cook on the stove on medium/low for about a half hour, then at that point decided I wanted to make it taste like cider, so that's when I added the spices.  How much spice you ask?  If I had to guess, I'd say about one teaspoon of the cinnamon, nutmeg and allspice and maybe about a half teaspoon of the ground cloves.  I used my nose to sniff out the proper amounts.


I let it simmer on low for about another half hour and during the simmering time I'd occasionally use my potato masher on the concoction to mush out all the apple goodness.  After I figured I milked those apple cores for all they were worth, I strained everything through a sieve and smooshed that too.  The resulting juice was a bit cloudy and filled with tiny apple bits.  Normally, I would have just said "good enough", but I was planning on giving some of the jelly as gifts so I went ahead and strained the juice through some milk filters (you could use coffee filters or good cheesecloth).  But be warned; you will have to rinse out the filters many times because it will clog up with all those apple bits.

Once you have your juice strained, put it in a container or jars in the fridge and make jelly tomorrow. Oh wait, that's what I did.  If you're not lazy like me, you can continue right on with your jelly-making.

Take six cups of juice and put it in a large (not stock pot large, but not a small pot either) pot.  Turn on the stove and add 8 tablespoons of pectin and stir.  Yeah, I know, I know, pectin comes in little pre-measured 1.75 ounce boxes.  But I don't have those boxes, I buy it in bulk.  So you're just going to have to measure.  Or go online and find a more helpful and user-friendly recipe.  I never said my recipes were easy to use!


Once the pectin is completely dissolved, keep stirring once in a while and watch for a boil.  Once the juice is boiling, dump in all 6 2/3 cups (yes, that much!) of sugar and stir until dissolved.  Keep the stove on high, keep stirring until it boils then keep it at a hard boil while stirring for one minute.  Once the minute is up, ladle the boiling-hot, oh-my-gawd-I-think-I'm-going-to-need-a-bandage-for-that-splatter, molten liquid jelly into your clean, hot/warm 1/2 pint or pint jars, wipe rims, apply clean/warm lids/bands and process in your already-boiling water canner for ten minutes.

Oh, and I found a great website for jelly making.  This link HERE gives you measurements for the sugar and pectin required for just about any fruit/juice.

So if my kind'a sort'a directions completely turned you off from making apple cider jelly, go to that website and read some actual cohesive jelly-making directions.  You could also skip the whole cider-making part and just buy a gallon of apple cider and then follow the jelly directions in the link above. 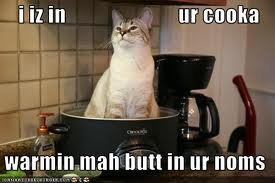