I’ve never done a fall garden.  Not sure why though.  I guess I’m so excited about getting the seedlings out in the spring, then wanting to harvest the fruits in the summer that I totally forget about planting again.  That, or I’m so sick of watering, weeding, squishing squash bugs, squashing hornworms and chasing chickens out of the tomato plants that I forget I really should be starting it all over again in just a few months.

But this year’s garden sucked.  Royally.  I did plant about two dozen bush beans the first week of July, but a damn rabbit has been methodically eating each one down to the ground.  There are only four, maybe five plants left and I haven’t harvested a single bean yet!
About two weeks ago I planted several small rows of spinach and green onions, sugar snap peas and cabbage in the raised beds. 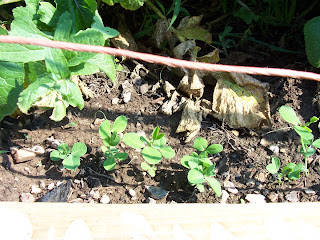 Peas!  Yes, they are too close together.
I have a problem thinning things out.

The peas & cabbages have sprouted and now all I have to do is keep the chickens from picking at the seedlings and the dogs from digging into the soft dirt.  Because you know, there is no other piece of greenery for the chickens to eat or any other patch of dirt to dig in.  For gawds sakes, there’s thirty stinking acres to pick at and dig in……go find another spot!! 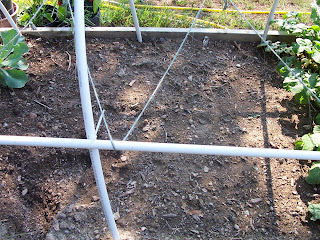 This is where I planted the spinach.
See anything?  Me neither.
I also planted three dozen hills of bush beans in the “berry” garden and some more cabbage plants.  You know, to give the rabbit some variety for supper.
Anybody know how to catch a rabbit?  It doesn’t live inside the fenced garden area, so I’m assuming that it’s slipping through the gate where there is a gap.  I've gone out there in the middle of the night, flashlight & shotgun in hand, but never seem to catch the bugger in the act.  I would put out the live trap, but I have no idea what to bait it with?  A carrot?  Is that too cliché?  We also have several snares and Conibear traps, but I’m always afraid that I’ll catch something I didn’t want to.  At least with the live trap I can decide the trespasser’s fate.
Posted by Carolyn at 10:45 AM