The Ag teacher / friend that took our Boer kids as FFA projects was working on a goat project of her own.  But her projects weren't Boers, they were Nigerian Dwarfs.  Three of them to be exact.  But those little bundles of fuzz were located five hours away.

I figured since I was such a nice friend (and wanted to to go Oklahoma), I would accompany her on the long drive.  She loaded a big dog crate in the back of the truck, tarped it up and secured it down, then picked me up yesterday morning bright and early.  The trip there was pleasantly uneventful and since I was a passenger, I got to do a lot of rubber-necking.  Oklahoma wasn't as flat as I thought it would be, but we really didn't go very far west.  Saw some oil wells, some corn, alfalfa and wheat fields and long(er) distance views.  We ended up making a pre-planned stop at a little diner in the town where the goat lady lived and I got to do something (besides eat) that I've been wanting to do for a while; meet a fellow blogger!
It was really, really neat to be able to meet one of my blog buddies.  She picked a restaurant known for their heavenly fried foods, and I love her for that.  I ate a chicken fried steak sandwich (which was bigger than my hand splayed out) with gravy and a basket of onion rings.  And a water.  I'm trying to watch my figure, you know.  We yammered on a bit about farmish things, and whenever we mentioned "poop", her daughter would roll her eyes or say "Mom! Stop talking about that when I'm eating!!" Which, to her credit, was probably the proper thing to do as it's really not polite to talk about rabbit and goat shit while eating.  I think we stopped talking about poop so her daughter could eat without covering her ears, but then dove right into the details and smells that come from the process of skinning rabbits and what happens if you leave the hides in the tanning solution too long (PS, pester Kelly to tell that story on her blog, it's hilarious!!).

Now, tell me, how many people do you know that don't mind talking about that kind of stuff while shoving a battered & fried hunk o' steak down your maw?  I LOVE my blogging buddies!!!!

Even though I could have stayed in that diner for hours talking about poop and chickens and feral cats and rabbit feet, we both had to go.  They had a movie to catch (girly afternoon for Mom & daughter) and Adrian & I had goat kids to pick up.

The drive to the goat lady's house wasn't more than ten minutes.  We pulled into the driveway and my jaw almost dropped.  Oh, the beauty of a real, honest to goodness barn!  Not just a barn, but a perfectly clean, proper, fancy barn!  It was amazing.  Ever been to the barns where they keep the Budweiser Clydesdale horses?  Or maybe a barn where they breed fancy racehorses?  Well, it was like that, but in miniature.  The main entry was immaculate, the wood stalls were polished, even the floors looked like fresh bedding was put down straw by straw.  I couldn't see a speck of dust or dirt.  Even the chicken coop area was spotless.  I don't think her chickens ever crap.  Seriously.  I could live in this place.

Anyways......the stalls were all Nigerian Dwarf sized.  The milk stanchion was Nigerian Goat sized and there was an antique rocking chair with a cushion on it for milking.  In. The. Barn.  And without any dust/crap on it!!!  And it was cuter than shit.  The goat kids were cuter than shit.  And this lady was c.r.a.z.y. about her goats.  I wanted to be one of her goats.

Anyways......back to the goat procurement.  After the goat lady showed Adrian her new goats and they signed paperwork, the goat lady asked us into the house for some homemade goat milk ice cream.  Which I tried not to jump up and scream "Yes please!!!" when she asked.  She showed us into the kitchen (old Irish farmhouse looking kitchen, btw.  Beautiful.), washed our hands in the huge farmhouse sink with homemade goat milk soap, ate some vanilla goat milk ice cream and then had a sampling of goat milk & blueberry kefir.  Which I liked, but Adrian politely gagged down.  She's such a trooper!  We profusely thanked goat lady for the hospitality, but told her we had to be on our way.  It was a five hour drive back home and we wanted to be back before dark.

So we exit the house, pick up the kids and bring them to the truck.  Then the goat lady asks where we'll be putting her little babies.  When Adrian starts looking towards the back of the truck, goat lady visibly shuddered and with a noticeable tremor in her voice says, "How long is the ride back??"  Adrian and I both look at each other and repeat "five hours".  Goat lady's left eye twitched.  I know she was being polite and trying to hold back her apparent horror, but even her rigid politeness couldn't hold back what she was feeling inside.  I'm certain that she had a small aneurysm. This lady was not going to be able to let her little darlings travel in the back of a truck in a dog crate.  And both Adrian and I sensed that.  So instead of trying to convince her that we've done this before or that they'd be perfectly fine, I opened the truck door, plopped myself down and we told goat lady that I'd just hold them in my lap instead.

Goat lady goes into the house to get some old rags just in case they went potty.  Just in case?! Well, of course they're going to shit & piss all over, they're goats.  What goat do you know that isn't going to relieve itself fifteen seconds after you put it in a clean stall?

She comes back with some "rags".  Fluffy, white, Egyptian cotton bath towels thicker than my bedroom mattress.  I didn't know if she wanted me to put them on the floor or wrap the kids in them, so I just put the towels on the floor board in front of me and on my lap.  Adrian jumps in the drivers seat, I roll the window down so she can say goodbye to her babies, and we pull out of the driveway.  Goat lady waved and clutched her chest, I'm certain. When we're certain we're out of earshot, Adrian looks at me and we both say at the same time, "As soon as we're out to the highway those goats are going into the crate."

Now before you think we're both evil people, I do have to say this.  I don't mean to bad mouth the goat lady.  She was one of the nicest people you could have met.  She obviously lovers her animals and cares for them very (very, very, veeeeeeerrrrry) deeply.  The world would be better off with more people like her.

And you'd be happy to know that we did NOT have to put the kids in the dog crate.  After a few minutes of jumping & wiggling & chewing on everything in the truck, they did settle down and we were able to keep them on the floor boards in the truck: 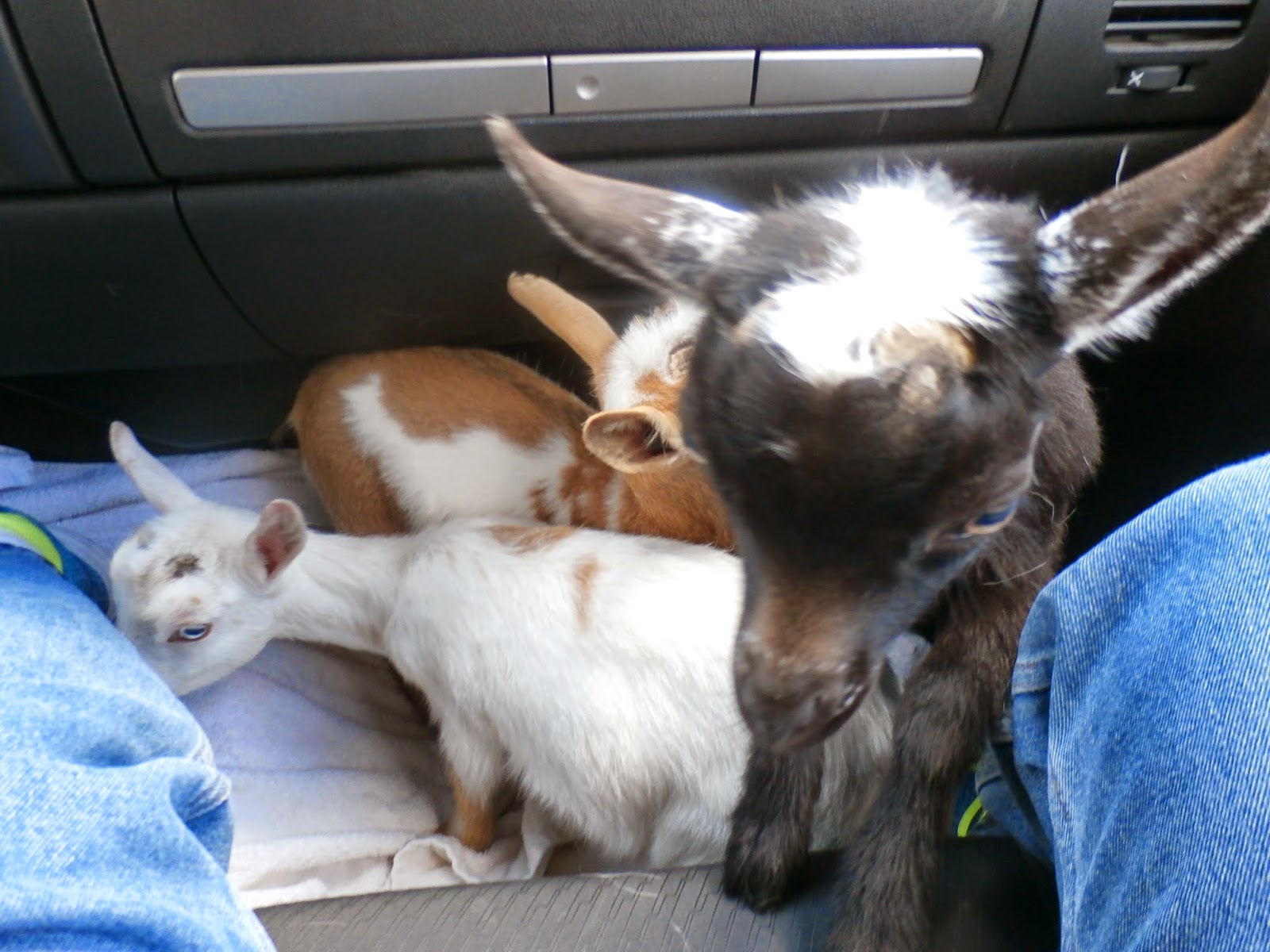 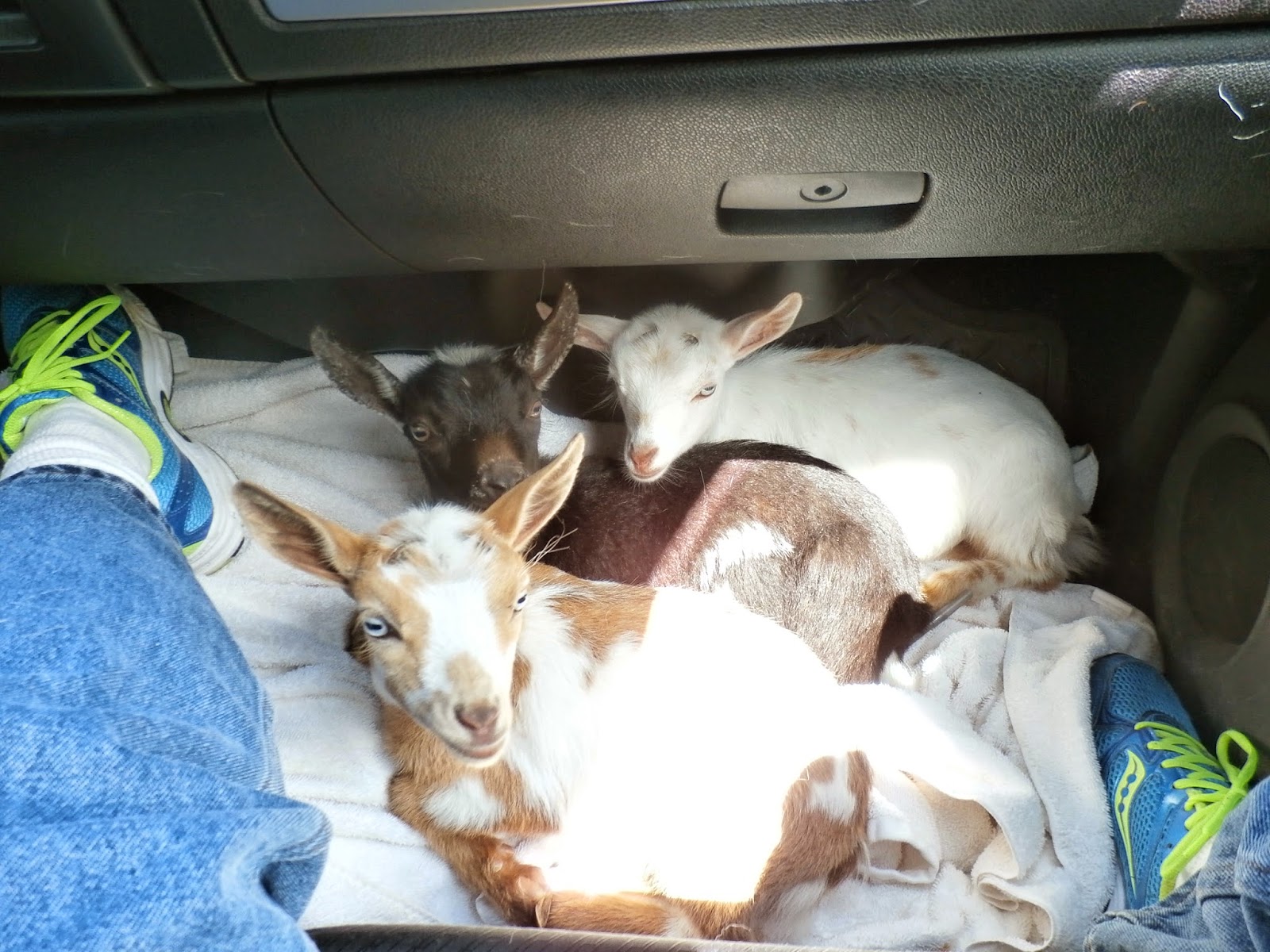 It was a little cramped.  The goats peed & pooped (imagine that) on the towels.  They ate my shoe laces.  I have a horrible back ache today from having to pretzel myself around the goats.  But we don't have to live with the thought of having to have lied to the nice goat lady that we didn't put the goats in the back of the truck.
Posted by Carolyn at 8:38 PM