I will be the first to admit (and Paul will no doubt agree) that I am a Sloth. 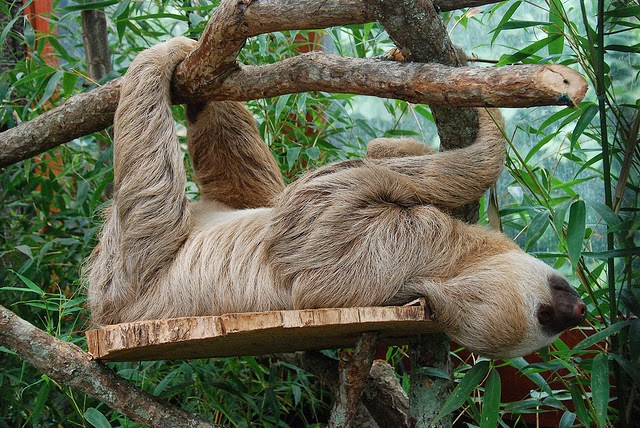 I have tons of ideas and plans and To-Do lists, but once the initial excitement of start-up motivation wears off, I run out of steam very quickly.  I don't know how many unfinished projects we have around the house (yes, Mom, I know) and even some in my head are unfinished.

Yesterday I went out (after the rain storm) to survey the Soon-To-Be or, more realistically, Hopefully-Before-I'm-Dead, Garden.  I had planned on making it our Permaculture Garden.  You know.  Lots of different vegetables, fruits, bushes, flowers, trees, etc. living in symbiotic harmony.  Last year we planted four apple trees, a couple dozen squash plants and cucumbers.  I also started a compost pile over there with all the dead vegetation from last Fall / Winter.  Well, it didn't get squat done to it this year.  Because I'm a total sloth.

Well, we actually did put a few things in there.  Three rows of winter squash, most of which were washed downstream by the constant bombardment of precipitation we've been receiving the past month.  A few weeks ago Paul finally got out the cattle prod and got me to help him plant a bunch of sweet potato slips.

Anyways.  Back to me stomping around in the garden in the mud.  Since it just rained, I figured I'd go out there and rip out some of the larger (like, 4' tall) weeds and toss them into the compost pile so I could tell Paul that I actually worked in the garden that day.  While I was ripping out gigantic mullein plants and wrestling with ragweed big enough to choke an elephant, I spotted something familiar: 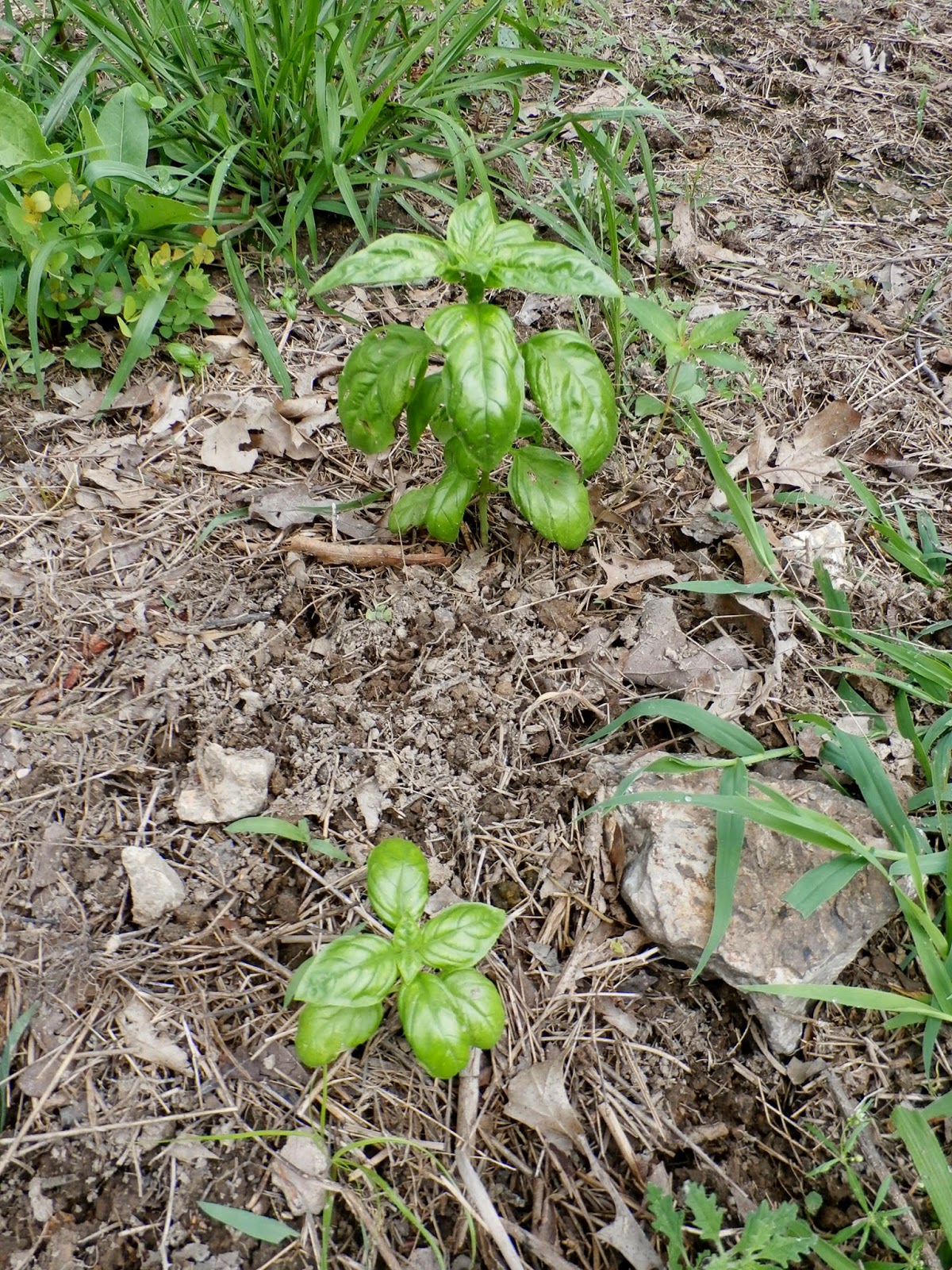 There are no less than twelve basil plants.  And to think I couldn't for the life of me start those buggers from seed.  And just a dozen feet away, I found no less that six volunteer squash plants. 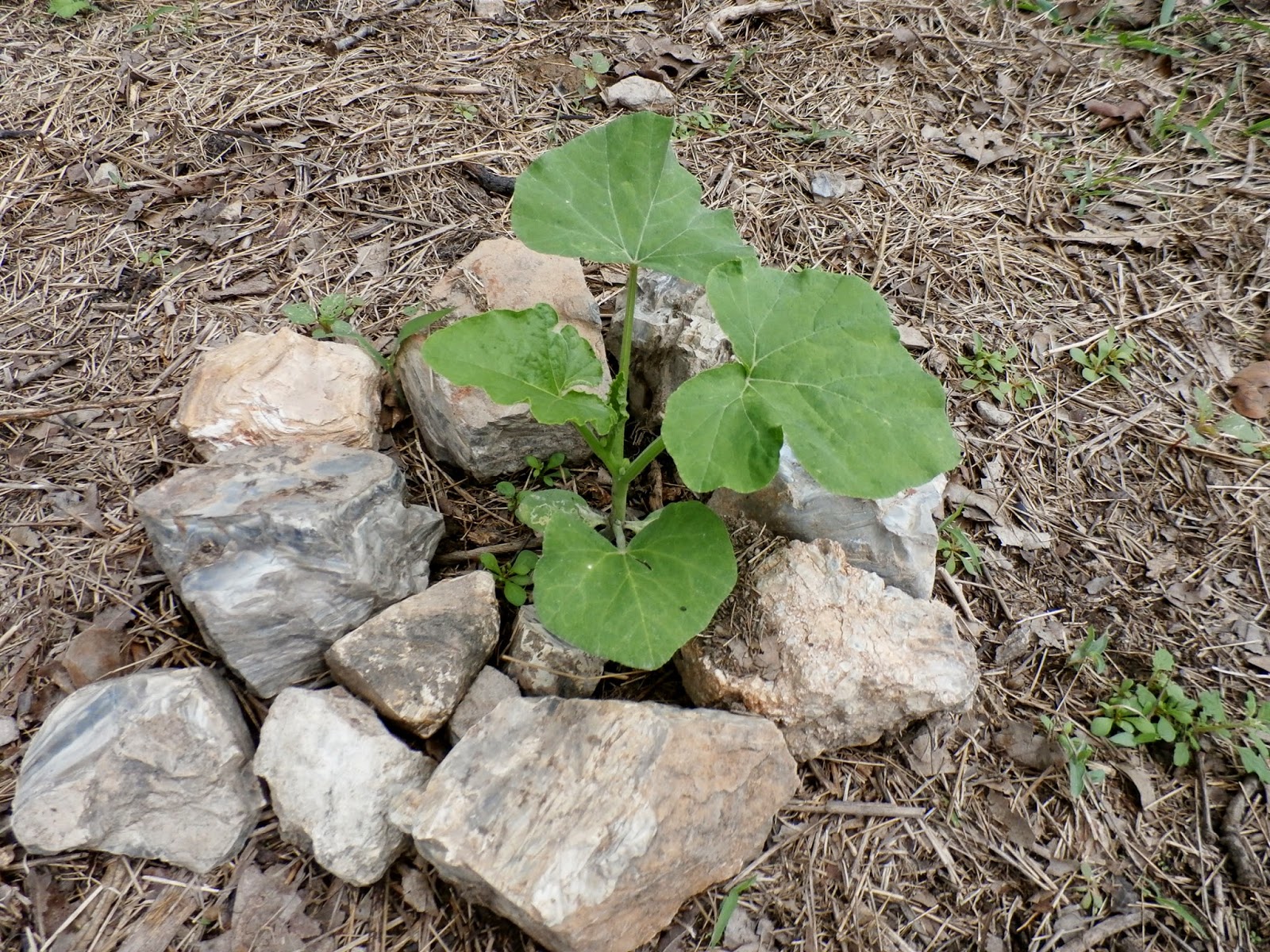 They are where I planted summer squash last year, but they are also "downstream" of the compost pile so goodness knows what they will turn out to be.

Next to the apple trees?  Cucumbers climbing the cages: 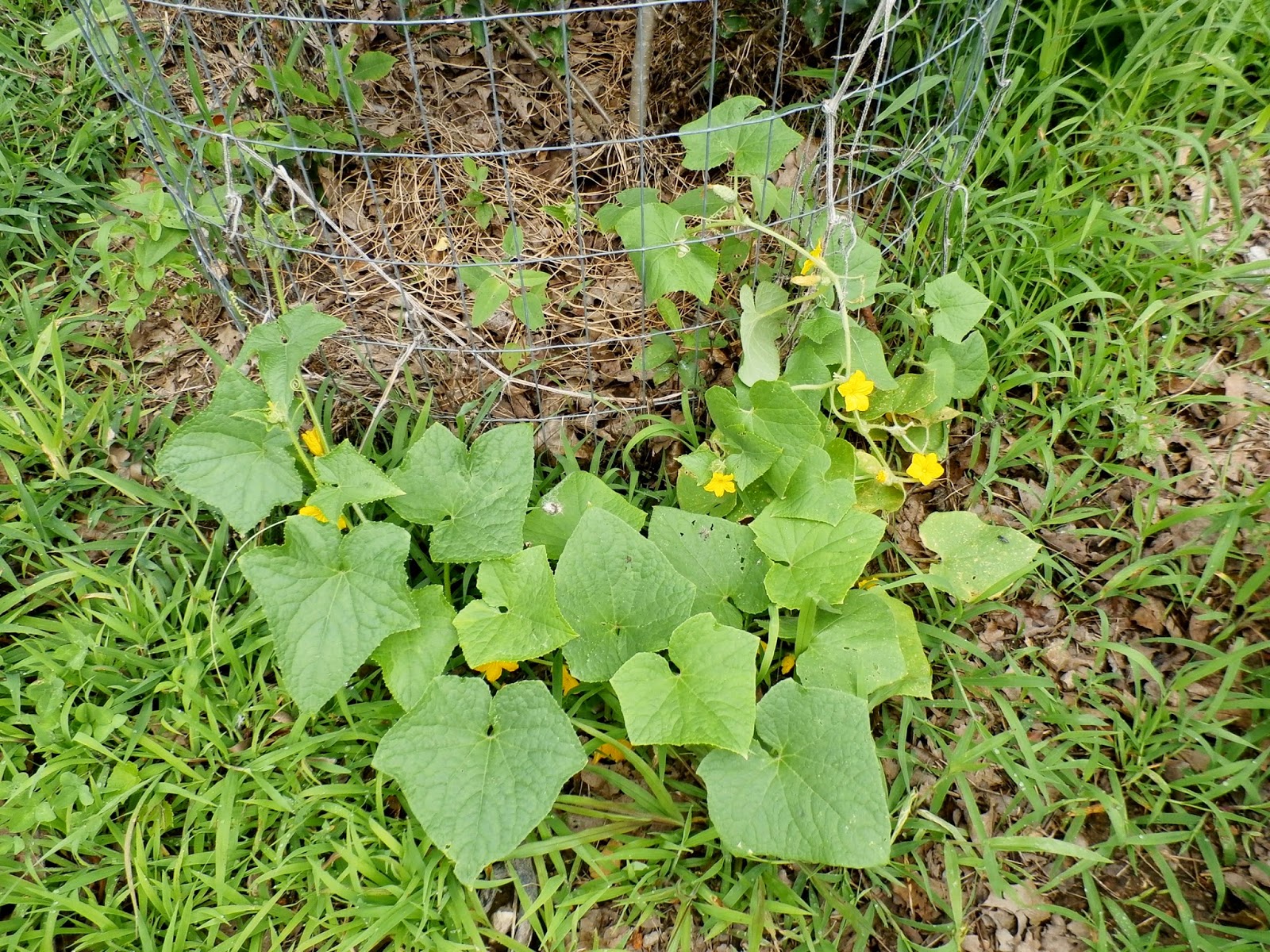 I've always wanted to have Paul blade up a huge section of ground and just go out there in the spring and toss whatever old / cheap / gifted seeds out there and just see what comes up.  No watering, no weeding, just let Nature take it's course.  I guess this is what kind'a happened here this year.

I pulled some of the weeds from around the desirable plants, but kept some there just because.  I figured that if the bugs had other things to munch on, or climb on, or have to go through in order to get to my good plants, then the better.  I'm only going to pull the really nasty stuff (like morning glory or prickly sida) and the vegetation too close to the plants or those that would compete for sunlight.  I figured that this Slothwoman way of gardening would also deter the chickens from focusing on one particular plant and scratching it into oblivion.  Haven't you noticed that if you plant a seedling in the middle of a perfectly weeded garden, the chickens go right to the seedling and start their assault?  I think it's because it's so obvious a target.

So, although I may have not done squat this Spring in planting, it looks like I got some good things growing around the homestead!
Posted by Carolyn at 9:04 PM